Back in 2014, the A-10 Warthog Crushed Its Enemies During a Crazy Wargame 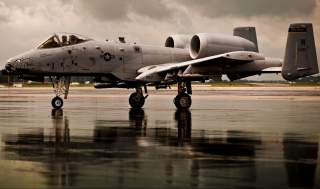 Two squadrons of A-10 Warthog attack planes scored a military record in Louisiana in March, shooting down unprecedented numbers of “enemy” aircraft during an intensive war game.

The officer in charge of the semi-annual “Green Flag” exercise praised the 1980s-vintage A-10s. “They unleashed the Hogs,” Air Force Lt. Col. Brett Waring said of the Idaho and Louisiana squadrons.

Waring added a thinly veiled criticism of the Air Force, which wants to retire all 340 of the cheap, rugged Warthogs by 2019 and replace them with flimsy, pricey F-35 stealth fighters.

Defense Secretary Chuck Hagel described the A-10 as a “40-year-old, single-purpose airplane originally designed to kill enemy tanks on a Cold War battlefield.”

Waring rejected that assessment. “Single-purpose, single-mission? My ass. That bird out there kicks ass.” The armored A-10 carries missiles and bombs and packs a powerful 30-millimeter cannon. In 1991, a Warthog used its gun to shoot down an Iraqi helicopter. A-10s sank enemy warships during the 2011 international intervention in Libya.

The March 9 to 26 exercise pitted Army units and the supporting Air Force squadrons against JRTC’s highly-trained Opfor. Firing lasers instead of live rounds, the two sides battled on the ground and in the air. Opfor uses Lakota helicopters painted to represent Russian-style gunships.

The Opposing Force quickly gained the advantage. “The Army got it handed to them,” Waring said. “No other way to put it.” Opfor “killed” the entire Army force twice, forcing it to “regenerate”—like getting extra lives in a video game.

Soldiers at JRTC must defend against “the constant threat of enemy aviation,” according to the 1st Squadron, 4th Cavalry Regiment’s Facebook page. A squadron photo depicts a soldier aiming his Javelin anti-tank missile into the sky. Optimized for killing tanks, in a pinch the Javelin can also bring down low-flying aircraft.

The Army rallied, calling in the A-10s for intensive air strikes that turned the tide of the mock battle. “We had the most kinetic strike operations in the last three years of Green Flag, just in those last few days,” Waring said.

And in the course of their counter-attacks, the Warthogs shot down a record number of Opfor aircraft—presumably the Lakota gunships. The Idaho and Louisiana squadrons “now hold the Green Flag record for the most air-to-air kills,” Waring boasted.

Equally enthusiastic about the fearsome A-10, a coalition of lawmakers is working to save the Warthog, by crafting legislation preventing the planes’ retirement.