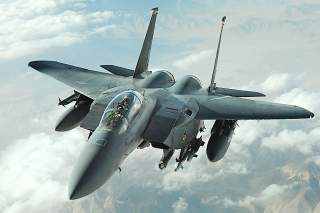 As a young 26-year-old fighter pilot, I had the glorious honor of flying F-15C’s during Operation Desert Shield/Desert Storm.  While stationed with the 58th Tactical Fighter Squadron (TFS), I was deployed to Tabuk, Saudi Arabia.  During that conflict, I witnessed firsthand the powerful force multiplier that the F-15 Eagle provided to the battle plan.

We flew High-Value Airborne Asset (HVAA), Pre-strike Sweep, Detached Escort, and Combat Air Patrol (CAP) missions.  We were re-rolled while airborne to provide cover for Combat Search and Rescue (CSAR) missions.  The versatility and capabilities of the F-15 to provide clear dominance in all those missions has not changed.

Politicians in Washington, D.C. are having a debate pitting the F-15 versus the F-35 stealth fighter jet. From my perspective as a person who has flown the F-15C on missions, there is no need to move away from that amazing and versatile fighter jet. Politicians are making decisions that may help the people who make the F-35, but the people that matter the most, the U.S. Air Force fighter pilots, should have all the tools they need to fight in modern warfare.

My experiences show examples of how the F-15 is a proven fighter jet with years and years of accomplishment. My very first combat mission involved 8 Multi-Stage Improvement Program (MSIP) F15Cs in a pre-strike role.  We split into two four-ship formations as there were two Iraqi Air Force MiG-29's airborne separated by 200 nautical miles.  Our four-ship engaged two MiG-29s which were subsequently destroyed by AiM-7M missiles.  The main reason for sharing that small story was to demonstrate the amazing reliability that our F15s maintained during the entire conflict.  The 58th TFS flew 1,182 combat sorties and 7000 hours.  Two statistics that prove without a doubt how reliable and dependable the F-15 Eagle is a force multiplier.

However, my humble opinion is that the proven track record of the F-15 and the success that the Eagle has demonstrated in over 47 years of air superiority will never be matched.  The tactics and ability of fighter pilots today to employ the F-15 in a multitude of combat missions is still as valuable today as it was 28 years ago when I was flying the machine.

I see the F-35 as a truly an impressive aircraft, even though I favor the timeless capabilities of the F-15s.  My experiences are not to take away from the F-35, but they are different aircraft that provide different capabilities.  The Air Force, like the other branches of the armed forces, need many different combat-ready tools to avoid being ill-prepared for differing threats.  The impressive F-35 and the amazing array of F-15 aircraft are supplements to each other, and neither should be procured to the exclusion of the other.

The ultimate choice, as with so many things in our government, is budgetary concerns.  The F-35 has proven, time and time again, that the budget overruns and lack of consistent dependability tarnish an impressive fighter.  Given the modernization of the F-15C to the F-15X, it seems very logical that best bang for the taxpayer’s dollars is to revitalize the F-15X.  I humbly submit that I am a “retired” fighter pilot but am truly one who knows firsthand the awesome capabilities of the F-15 Eagle.

Col Mark J. Arriola is a 28 year retired veteran of the U.S. Air Force. He has flown over 70 combat support and combat sorties during Desert Shield/Desert Storm.  He was awarded the Air Medal and Aerial Achievement medals along with several other awards.  He had the distinction of being an AF 2 LT and leading missions while deployed with the 58th Tactical Fighter Squadron.  He served two assignments flying the F-15C and one assignment in the Texas Air National Guard as an F-16 pilot.