Bad News: ISIS Has Just As Many Fighters In Iraq And Syria As It Did 4 Years Ago 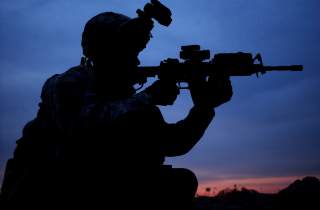 The U.S.-led coalition to defeat ISIS in Iraq and Syria may have routed the terror group from its urban strongholds in Mosul and Raqqa, but new reports from both the Department of Defense and United Nations reveal that tens of thousands of ISIS fighters are still lurking across the war-torn countries — an army of jihadists on par with the group’s peak strength in 2014.

- A report from a United Nations panel of experts circulated to the media on Monday affirmed the DoD’s findings, concluding that ISIS  “has up to 30,000 members roughly equally distributed between Syria and Iraq and its global network poses a rising threat,” per the Associated Press.

- If that 30,000 figure sounds familiar, it should. Back in September 2014, the Central Intelligence Agency suggested that between 20,000 and 31,500 ISIS fighters were roaming between Iraq and Syria; at the height of its power, ISIS fighters numbered around 33,000.

- “Taken at face value, the U.S. government is saying ISIS has the same number of fighters in Iraq and Syria today as when the [coalition] bombing campaign began,” Foundation for Defense of Democracies senior fellow Thomas Joscelyn told Voice of America.

- The UN estimate in particular includes  “a significant component of the many thousands of active foreign terrorist fighters,” per the AP, noting that despite ISIS’s battlefield losses, “a reduced ‘covert version’ of the militant group’s ‘core’ will survive in both countries, with significant affiliated supporters in Afghanistan, Libya, Southeast Asia and West Africa.”

Ironically, U.S. Special Operations Command chief Army Gen. Raymond Thomas claimed last summer that the U.S. military had killed 60,000 to 70,000 ISIS militants since the U.S.-led coalition initiated Operation Inherent Resolve in 2014. Taken with the DoD and UN data, perhaps this is a good reminder that body counts aren’t the best indicator of success on the battlefield.