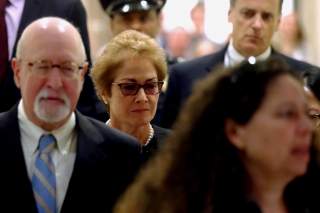 A top State Department diplomat accused Trump allies and former Ukrainian officials of pushing “unfounded” and “false” allegations that led to her removal as ambassador to Ukraine, according to an opening statement she made before a House deposition Friday.

Trump referred to Yovanovitch during the call as “bad news.” Zelensky said that he agreed with Trump “100%,” and said that Yovanovitch “would not accept me as the new president well enough.”

But Yovanovitch, who was removed from her post in May, two months ahead of schedule, said she was targeted by “baseless conspiracy theories” that former Ukrainian prosecutors and Trump allies have peddled “to anyone who would listen.”

Yovanovitch called the effort “a concerted campaign against me, and that the department had been under pressure from the president to remove me since the summer of 2018,” according to The New York Times.

The first known allegations against Yovanovitch surfaced on May 9, 2018, when then-Texas Rep. Pete Sessions sent a letter to Secretary of State Mike Pompeo claiming that he had heard from associates that the ambassador was bad-mouthing Trump.

Sessions’ role in pushing for Yovanovitch’s ouster came under new scrutiny Thursday, after two Soviet-born associates of Rudy Giuliani were indicted on charges of making illegal campaign contributions aimed at enhancing their political and business interests.

Prosecutors said that Lev Parnas and Igor Fruman, the Giuliani associates, were involved “in causing the U.S. government to remove or recall the then-U.S. Ambassador to Ukraine.”

“PARNAS’s efforts to remove the Ambassador were conducted, at least in part, at the request of one or more Ukrainian government officials,” the indictment said.

Parnas and Fruman committed to raising $20,000 to “Congressman-1,” who has been identified as Sessions.

Sessions, who lost his re-election bid in 2018, did not disclose in his May 2018 letter to Pompeo that he had met that same day at his congressional offices with Parnas and Fruman.

Sessions denied acting at Parnas and Fruman’s behalf in sending the letter to Pompeo. He claimed that he had heard other complaints about Yovanovitch, but he did not say who else he spoke to regarding the diplomat.

The allegations against Yovanovitch took on new life earlier this year when John Solomon, an opinion columnist then with The Hill, posted an interview with Ukraine’s then-general prosecutor Yuriy Lutsenko, who claimed that Yovanovitch had given him a list of individuals who he was not allowed to investigate.

“Unfortunately, from the first meeting with the U.S. ambassador in Kiev, [Yovanovitch] gave me a list of people whom we should not prosecute,” Lutsenko said.

Those remarks caused a diplomatic stir in Ukraine. Lutsenko walked back his claims in a later interview.

It has since been revealed that Lutsekno met with Giuliani, Parnas and Fruman in the months before his Hill interview.

Giuliani gave the State Department notes of interviews with Lutsenko that he took part in alongside Parnas and Fruman on Jan. 25 and Jan. 26, 2019. During one of the interviews, Lutsenko said that Yovanovitch asked him to close an investigation into Serhiy Leshchenko, a former member of parliament who in August 2016 released the so-called “black ledger” that alleged that then-Trump campaign chairman Paul Manafort received illicit cash payments from Ukraine’s Party of Regions.

According to The Times, Yovanovitch testified that John Sullivan, the assistant secretary of state, told her she had “done nothing wrong and that this was not like other situations where he had recalled ambassadors for cause.”

She said Sullivan told her in April that Trump had “lost confidence” in her “and no longer wished me to serve as his ambassador.”