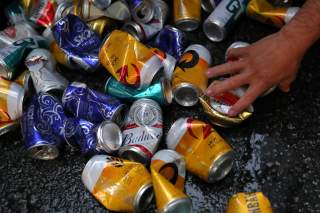 Virtue signaling is the modern, politically correct way to demonstrate your “goodness” to others, usually with little actual sacrifice or effort.

It’s a kind of surface-level, and typically meaningless, moralizing that Americans get force-fed from Hollywood types seeking accolades on social media.

Now, if you live in one Maryland county, you too can participate and pretend to be saving the planet while doing absolutely nothing.

The Baltimore Sun reported in early February that Baltimore County—which does not actually include the city of Baltimore proper, but surrounds the city—hasn’t recycled glass in seven years. In 2013, the year the glass recycling stopped, the county opened a $23 million single-stream recycling facility.

That kind of facility, now the most common, allows for many different materials to be mixed together and recycled. But not glass, apparently.

Given the county’s inability to recycle glass, surely residents could simply deposit glass in the trash, where it would end up anyway?

According to the Sun, “county officials have been reluctant to tell residents not to recycle their glass for fear of derailing a good habit.”

The bottom line is, the whole process is now little more than “virtue-cycling.”

In fact, as good as recycling may be in theory, it seems like there have been challenges to actually make it work the way most Americans imagine it should.

“Regardless of the material in question, the American recycling industry has been going through a crisis over the last several years,” noted Reason, a libertarian magazine, which wrote about the Baltimore County story. “Rising rates of contamination and the effective closure of a major export market in China, which stopped accepting most American plastic, have left material-processing facilities with no willing buyers. Many of the recyclables that are collected therefore end up in landfills or incinerators.”

Unfortunately, due to the zealotry of environmentalists, it seems that practical solutions to practical problems are left unexplored in favor of radical solutions to overstated ones—or mere virtue signaling to make themselves feel better.

For instance, the city of Baltimore last month banned plastic bags, a measure that will go into effect early next year. That’s despite the fact that there is little evidence that such bans are beneficial to the environment, not to mention themyriad other issues the city faces, such as the highest homicide rate among the biggest U.S. cities.

“Though they’re called ‘single-use,’ most people reuse them, typically as trash-can liners. When governments ban them, consumers buy thicker substitutes with a bigger carbon footprint,” John Tierney wrote at The Wall Street Journal. “Once discarded, they take up little room in landfills. That they aren’t biodegradable is a plus, because they don’t release greenhouse gases like decomposing paper and cotton bags.”

Americans should want to be good stewards of our environment. Our country is full of natural beauty, clean air is important to our quality of life, and the efficient use of our resources—frugality, one might call it—is a hallmark of our national character.

But the green movement now has the twofold problem of being on one hand a pseudo-religious movement for the “woke” upper-middle class and a barely disguised socialist Trojan horse on the other.

His article first appeared at The Daily Signal on February 26.