BANG: Glock's New Rimfire 44 Pistol (Worth It Or Just Hype?) 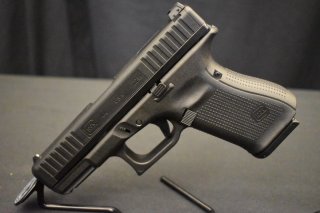 Here's What You Need To Remember: It took Glock several decades to release a rimfire version of its pistol series, but the specifications clearly show that the Austrian company put a great deal of thought into the execution. As a plinker or home defense pistol, the Glock 44 will face stiff competition from guns such as the Smith & Wesson M&P22 Compact and the Walter PPQ-22.

One of the most unusual developments in handguns this year was the revelation that Austria’s Glock was finally coming out with a rimfire pistol. The new Glock 44 will act as a training pistol, providing users of the company’s line of handguns a small caliber training pistol that fires inexpensive training ammunition. How it does on its own as a rimfire pistol in a market saturated with them remains to be seen.

In the early 1980s, Austrian business owner Gaston Glock developed a pistol to compete for the Austrian Army pistol contact. Glock, who had no formal education in firearm training and specialized in producing bladed instruments, filed a patent in April 1981 for the Glock 17 pistol. The pistol was made with a steel slide and polymer frame, and held an impressive seventeen rounds of nine-millimeter Luger ammunition. Above all, it was accurate and reliable, tested in adverse conditions including snow, dirt, mud, and ice.

Glock’s line of pistols started with the Glock 17 and gradually spread outward, expanding into compact, subcompact, and long slide models. At the same time, it expanded into practically every known pistol caliber, including .45 ACP, .380, 10-millimeter, .357, and .40 Smith & Wesson. Along the way it even inspired a new pistol caliber, .45 GAP. Like the finches of the Galapagos Islands, Glock’s pistol line, unchanged save for the caliber and handgun size, expanded to fill nearly every niche in the world of handgun shooting.

All except for one niche. The one untouched quarter of Glock’s ecosystem was the .22 Long Rifle rimfire caliber. While many companies, such as Ruger and Browning release specialized .22 pistols designed for competition shooting, others such as Smith & Wesson and Walther shoehorn the rimfire round into a version of their larger caliber pistols. Glock has finally taken the latter route, creating a pistol that looks like a much larger pistol—but is still very much a Glock.

The Glock 44, announced in December 2019, is the company’s first rimfire caliber pistol. The Glock 44 is dimensionally almost identical to the compact Glock 19 pistol. The second Glock after the Glock 17 released by the Austrian arms company, the Glock 19 is often considered by Glock enthusiasts to be the ideal Glock pistol. The G.19 is smaller and lighter than the Glock 17, adding to its concealability, while at the same time carrying just two fewer rounds of ammunition.

The G.44 follows the G.19 closely: the G.44 is 185 millimeters long, just two millimeters shorter than the nine millimeter compact pistol. The pistols are both 128 millimeters tall and 32 millimeters wide. The most discernible physical difference between the two is the weight: the Glock 19, built to carry fifteen nine-millimeter rounds, weighs 21.16 ounces unloaded. The Glock 19, built to fire a lighter round with less recoil and lower chamber pressure, weighs just 12.63 ounces.

The Glock rimfire pistol is pretty clearly meant as a training pistol, and in performance parameters it tracks its larger cousin very well. The pistols are identical, and the manual of arms to load a magazine, chamber a round, and aim down sights are exactly the same. The act of drawing from a concealed position is identical. Trigger pull is 26 newtons of force, similar to the Glock 19’s 28 newtons of force.

Aiming is also similar. The two pistols feature the same pair of sights, with the rear sights a raised white horseshoe and front sight a white block. The two pistols thus sight in exactly the same. The Glock 19 and Glock 44 even have the same sight radius, exactly 6.02 inches. The result is that the two feature the same sight picture, providing familiarity during training that compares favorably with the larger caliber centerfire handgun.

It took Glock several decades to release a rimfire version of its pistol series, but the specifications clearly show that the Austrian company put a great deal of thought into the execution. As a plinker or home defense pistol, the Glock 44 will face stiff competition from guns such as the Smith & Wesson M&P22 Compact and the Walter PPQ-22. As a Glock, the G.44 could find itself in the collection of many Glock aficionados, an affordable training pistol that could end up being used far more than any other pistol in a shooter’s private inventory.

Kyle Mizokami is a defense and national-security writer based in San Francisco who has appeared in the Diplomat, Foreign Policy, War is Boring and the Daily Beast. In 2009 he cofounded the defense and security blog Japan Security Watch. You can follow him on Twitter: @KyleMizokami. This article first appeared earlier this year.