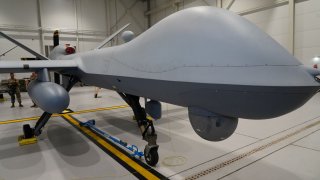 The Marine Corps has plans to deliver new drones to Hawaii, in order to deal with threats from China. That’s according to a new "Unmanned Campaign Framework” released this week by the Marines and Navy, as cited by United Press International.

The Marines will place eighteen MQ-9A Reaper unmanned aerial drones in the Pacific, including eight of them in Hawaii, the framework said. Those drones have wingspans of sixty-six feet and can weigh as much as 10,500 pounds, according to United Press International.

Marine Lt. Gen. Eric Smith, commanding general of Marine Corps Combat Development Command, had testified before Congress last week that the Marines were looking to procure sixteen more of the MQ-9A drones, of which there were previously only two, according to United Press International.

“Previous to this software, the MQ-9 was limited to four AGM-114s across two stations. The new software allows flexibility to load the Hellfire on stations that previously were reserved for 500-pound class bombs or fuel tanks,” an Air Force report said last fall.

That forty-page Unmanned Campaign Framework was released March 15, meant to lay out the strategy for how to best use drones and other unmanned weapons.

"The Department of the Navy is moving with purpose to innovate and adapt new technology to build a more lethal and distributed naval force for the future,” Thomas W. Harker, the acting secretary of the Navy, wrote in his introduction to the report

“To compete and win in an era of great power competition, the Department is committed to investing in advanced autonomy, robust networks, and unmanned systems to create true integrated human-machine teaming that is ubiquitous across the fleet . . . to ensure success, the Navy and Marine Corps are tightly coupling our requirements, resources, and acquisition policies to develop, build, integrate and deploy effective unmanned systems faster.”

The introduction to the report discusses the different advantages of autonomous systems for warfighting, including the ability to take on additional risk, to “increase lethality, capacity, survivability, operational tempo, deterrence, and operational readiness, and to adapt to changes.

In addition, the report includes a section on “legal, policy, and ethical considerations.”

“The overarching task for the DON is to develop, procure, field, and employ increasingly sophisticated unmanned systems that maximize warfighting effectiveness through their incorporation of autonomy and artificial intelligence, while remaining consistent with the Law of Armed Conflict, DOD policy, and AI ethical principles.”