Bang: Meet the 5 Best Machine Guns on the Planet 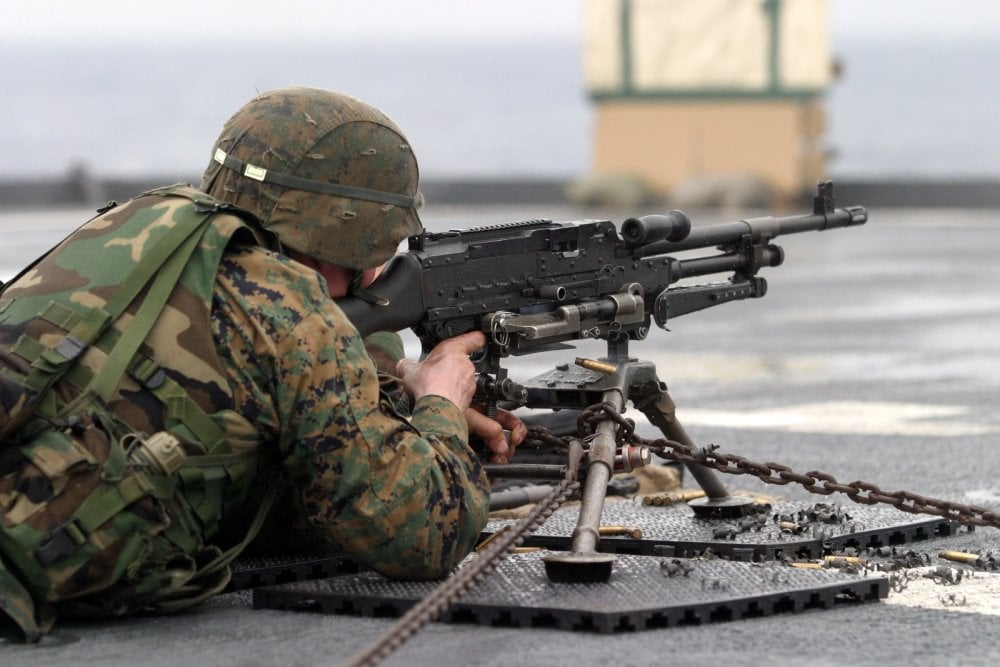 The man-portable machine gun is one of the most important weapons in an infantry unit. While improvements in standard-issue assault rifles, marksman rifles, squad automatic weapons, and grenade launchers have all increased the casualty-producing potential of other soldiers in a squad, the full caliber machine gun remains the most effective weapon in a platoon at most ranges.

But which could be considered the best?

The PKM is one of the most common machine guns in the world. Produced in great numbers by the Soviet Union, the PKM is found in the arsenals of almost every developing nation around the world as well as those of formerly Soviet-aligned states.

But it’s an excellent gun on its own merits as well. Weighing in at less than 17 lbs, the PKM is one of the lightest full-caliber machine guns in the world, while retaining excellent durability, recoil characteristics, and reliability. PKMs are some of the most feared weapons American troops face abroad, and are popular with Western-aligned private security contractors.

However, one characteristic of the PKM may strike Western users as a bit archaic. As the PKM is designed to use the same non-disintegrating ammunition belts as legacy Soviet machine guns like the SG-43 and M1910 Maxim, a PKM gunner often will have a long empty belt flopping off the left side of the gun.

The FN MAG 58 has served in practically every military in the Western world, and has been built by almost every arms manufacturer as well. Even FN’s perennial rival, Heckler and Koch, has built variants of the FN MAG for military contracts.

In its more than fifty years of service, the MAG has accrued a reputation for insane reliability in all conditions, including in sandstorms and humid jungles. A lot of this is due to the adjustable gas regulator that allows additional gas to be put into action in adverse conditions.

The design has proven easy to modernize, due to the robust mounting mechanism of the feed tray cover allowing for optics to be accurately mounted on it.

The only downside of the MAG is its relatively heavyweight at nearly 26 lbs. Some versions, such as the American M240L, have managed to shave some pounds off due to the use of lightening cuts and expensive materials like titanium, but the majority of users still use the heavy, mostly steel versions close to the original.

For many years, the MAG’s primary competition in the Western world was a revised variant of the German MG42, rechambered in 7.62x51: the MG3. While some may say its rate of fire is too high, the MG3 continues to serve as the primary machine gun of the Bundeswehr and many other militaries.

While it was previously reported that the new H&K MG5 would replace the MG3 fully as the machine gun of the Bundeswehr, in March 2019, it was announced that Germany would resume production of the MG3, after halting production in the 1970s. MG3s also continue to be produced in Turkey and Pakistan, resulting in their proliferation throughout the Middle East. Some European countries (such as Norway) even bought Turkish MG3 following the German halt in production. With the Germans spooling up their production again, the 1940s design may continue to serve on to its one-hundredth birthday.

As a gun, the MG3 is loved and hated for its insane rate of fire. However, it achieves that rate of fire at a weight slightly less than the FN MAG.  Unlike most variants of the MAG, which feed from loose belts (or a mounted “nutsack” in the case of the M240), the MG3 features a mount that can accept 50-round plastic “assault drums” or 100-round ammo boxes readily, making it easier to use as an assault machine gun from the hip.

When most of the world stopped exporting arms to South Africa due to the Apartheid regime, the South African arms industry stepped up. The Vektor SS-77, designed in 1977 is one of the products of that venture. Designed to replace the FN MAG, the SS-77 cuts out 5 pounds of weight, largely by redesigning the receiver and eliminating a lot of material near the barrel. The SS-77 also incorporates elements of the PKM in its design.

The SS-77 served the SADF well during the border war, and continue to serve the SANDF well to this day, though a modernization of it is meant to be fielded in the next few years. It also has achieved limited export success.

Probably the newest machine gun on this list, the 5.56 version of the Israel Weapon Industry (IWI) Negev was adopted to replace the FN MAG in the 1990s as the squad automatic weapon in the Israel Defense Forces. Since then, the IDF realized the need for a full caliber machine gun that was lighter as well, so a 7.62x51mm version of the Negev was developed: the NG7.

Due to it’s 5.56 “heritage,” the Negev NG7 is one of the only Western machine guns that comes close to the weight of the PKM, weighing in at only 17 lbs. It also features a semi-automatic mode for easy zeroing and for the conservation of ammunition, a rare feature on a modern machine gun.