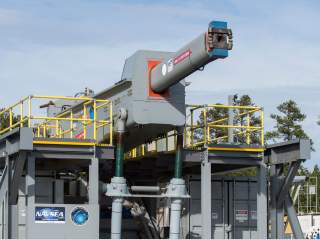 With China and Russia reportedly moving ahead rapidly with their own high-power electromagnetic weapon programs, fast-tracked U.S. efforts show the importance the military is assigning not only to their development, but also to the rapid fielding of these new technologies.

“The time now is to get directed-energy weapons to the battlefield,” says Lt. Gen. L. Neil Thurgood, the Army’s director of hypersonics, directed energy, space and rapid acquisition. “The Army recognizes the need for directed-energy lasers as part of the Army’s modernization plan. This is no longer a research effort or a demonstration effort; it is a strategic combat capability and we are on the right path to get it in soldiers’ hands.”

Introducing high-power electromagnetic weapons into the weapons mix across all warfighting domains is more than just a matter of technology, production, and deployment, however. It also will force major changes in tactics.

For example, China has developed a cruise missile that can be hidden inside a shipping container on a cargo ship. Such a missile, armed with an EMP warhead, could launch from any port to destroy vital military sites, manufacturing facilities, and critical infrastructure like the domestic power grid. Erecting electromagnetic defensive systems is considered the best short-term approach.

That also applies to major changes in defending the nation’s military assets overseas and afloat. A series of wargames last September and November were designed by the Joint Chiefs of Staff to evaluate how the services interact, coordinate, and frame new battle strategies in the event of combat with Russia or China.

“What we don’t have is a concept that accurately and with rigor describes how the services will fight against a peer adversary,” says Lt. Gen. Eric Wesley, deputy commanding general of U.S. Army Futures Command and director of the Futures and Concepts Center. “The reason we say we need a joint concept more than ever is because the tempo of warfare, and the complexity of all the domains.

Because all of these domains] are controlled at different echelons or by different services, military forces must integrate all domains quickly to take advantage of opportunities on a very lethal, hyperactive battlefield.

The Army also is prototyping a 100-kilowatt-class High Energy Tactical Vehicle Demonstrator (HEL-TVD) laser system for the new Family of Medium Tactical Vehicles. It also will serve as a research component for other directed energy weapons across the military services.

“Under the new directed energy strategy, the Army is leveraging progress made in that effort in order to merge the HEL-TVD with similar technologies in development by the Navy and the Office of the Secretary of Defense,” Army officials said in a statement. This will enable the services eventually to design laser weapons as strong as 250 to 300 kilowatts to protect sites from rockets, artillery, mortars, and UAVs.

In October 2018, the Navy added the electromagnetic spectrum to its five existing warfighting domains — land, air, sea, space and cyber. The new policy calls for an “enterprise approach to all activities necessary [for the Navy’s] roles and responsibilities for developing, implementing, managing and evaluating electromagnetic battlespace programs, policies, procedures and control to enable Department of the Navy superiority.”

Navy leaders this year will deploy prototypes of two of three NLFoS weapons systems under development: the Solid State Laser-Technology Maturation (SSL-TM) system, evolving toward a 150-kilowatt amphibious ship-based weapon; and the Optical Dazzling Interdictor-Navy (ODIN) for destroyers. A third, the High Energy Laser and Integrated Optical-dazzler and Surveillance (HELIOS) system, a 60-kilowatt weapon being developed by Lockheed Martin, is scheduled for sea trials aboard an Arleigh Burke-class destroyer in 2021.

The deployments are to do more than just test the systems; they will give sailors an opportunity to do what warfighters always do with new equipment — figure out ways to use it the engineers never imagined.

Another Navy program not currently part of NLFoS is the High Energy Laser Counter-Anti-Ship Cruise Missile Program (HELCAP). Lasers would be ineffective against incoming cruise missiles because the nose of the missile is designed to withstand significant high-speed heat. As part of an area defense effort, HELCAP would track a cruise missile and fire at its vulnerable side as it passes, burning a hole that would destroy the missile’s control systems.

Since the end of World War II, the U.S. has been the world’s dominant superpower. This largely has been due to a dominance in technologies other nations were incapable of matching, because of development cost or lack of engineering expertise.

While high-power electromagnetic weapons also rely on cutting-edge technologies and superior engineering, they are far less expensive to produce and field than nuclear weapons, aircraft carriers, or fifth-generation jet fighters.

Combined with increasingly cheap but capable UAVs, they offer many nations a new avenue to becoming a military near-peer with the U.S., especially if the leading adversarial developers of such weapons — Russia and China — share that technology with others, such as Iran and North Korea.

This article by J.R. Wilson originally appeared on Military & Aerospace Electronics in 2019.