Bannon: I Tried to Get Alleged Whistleblower Fired From NSC 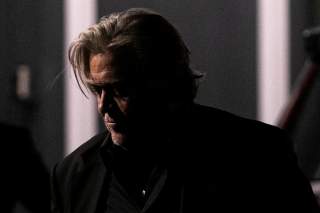 Steve Bannon said in an interview that when he was at the White House in 2017, he was involved in an effort to remove an intelligence officer suspected of being the Trump whistleblower from the National Security Council due to concerns about leaks.

“When I was in the White House there was a number of people in the National Security Council — the named individual eventually got let go, I believe because people were suspicious, not me, but other people around him were suspicious about his leaking, and that’s why he was let go,” Bannon, who served as White House strategist through August 2017, said in an interview with VICE published Friday.

The whistleblower, who is reported to be a CIA analyst, filed a complaint on Aug. 12 accusing President Donald Trump of abusing his office in his dealings with Ukraine.

“I don’t think the individual naming of the whistleblower is important, although there was a story in The Washington Times … that tied me to the efforts to get, at least, the gentleman who was named out of the National Security Council,” said Bannon, who left the White House on Aug. 18, 2017.

“Is that true?” a VICE reporter asked Bannon.

“The individual that was named, absolutely true,” he replied.

Multiple conservative media outlets have identified a former NSC official who handled Ukraine issues as the possible whistleblower. The Daily Caller News Foundation has not confirmed that the individual is the whistleblower.

Bannon did not name the individual during his VICE interview and said he does not think it is necessary to publicly identify the person. But he did confirm that he was involved in efforts to remove the alleged whistleblower from the NSC.

Bannon asserted that the background and motivations of the whistleblower are far more important than the individual’s identity.

“You don’t need to name the person. I do believe you need a thorough of his intentions, relationships he’s had, etc.,” Bannon said.

“I think it’s important to see the mentality and intent of people who did this,” he added.

Bannon did not respond to the DCNF’s request for additional comment.

Trump and House Republicans have called for the whistleblower to be identified and testify before Congress. Trump has accused the whistleblower of distorting what was said in a July 25 phone call with Ukraine’s president that is at the center of the complaint.

Democrats have countered that the whistleblower’s identity is now irrelevant because many of the allegations in the complaint have been corroborated by other witness testimony.