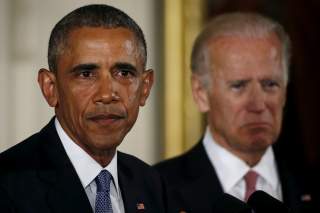 Key point: Obama launched several disruptive, catastrophic interventions, most notably in Libya and Syria. The unintended negative results of those crusades continue to reverberate nearly a decade after the initial U.S. actions.

Humanitarian crusaders trot out a variety of excuses to evade responsibility when their military interventions go awry. One frequent excuse is that a failure is because the U.S. and Western commitment to the mission was either inconsistent or insufficiently robust.  Another popular explanation for disappointing results is that the effort would have succeeded if not for malign foreign interference.  That rationale has become a favorite for the architects of the Syria debacle, who contend that Russia’s intervention beginning in 2015 saved Bashar al-Assad’s beleaguered, evil regime.  One striking feature is the absence of diminished confidence that a more determined U.S.-led effort can succeed or that Washington has a moral and strategic obligation to make the attempt, even when the previous meddlesome policy has imploded.

When those excuses are not available, defenders of a failed humanitarian crusade insist that their intentions were good, and that they should be judged according to that standard. The good intentions dodge is perhaps the most maddening. Barack Obama seemed to recognize the inherent deficiency when he first met Samantha Power, an advocate of the “responsibility to protect” (R2P) doctrine, and a passionate proponent of U.S. involvement in multilateral military interventions for humanitarian goals. Obama reportedly praised Power’s book on the Rwanda genocide, but then he observed that it “seemed like malpractice to judge one’s prospects by one’s intentions, rather than making a stren­uous effort to anticipate and weigh potential consequences.”

Obama was right, but he didn’t heed his own insights. Not only did he choose Power for a series of high-level policy posts when he became president, culminating in her appointment as ambassador to the United Nations, but he launched several disruptive, catastrophic interventions, most notably in Libya and Syria. The unintended negative results of those crusades continue to reverberate nearly a decade after the initial U.S. actions.

Daniel Larison, senior editor at the American Conservative, provides a provocative analysis that has the ring of truth about why humanitarian interventionists focus so heavily on their supposed good intentions.

Ultimately, they see themselves as defending the legitimacy of humanitarian military intervention and R2P, thereby preserving the possibility of future interventions.  “To admit that one of their interventions failed and made things worse,” Larison concludes “would be to bring discredit” on the entire concept.

But there is little doubt that the situations in both Libya and Syria are substantially worse than they were before the United States and its NATO allies began to meddle. Overthrowing Libyan dictator Muammar Qaddafi produced pervasive chaos that has now culminated in a bloody armed struggle between two rival autocratic governments. The author of a new UN report states that the impact of the country’s 9-year internecine conflicts on civilians “is incalculable,” Washington’s effort to oust Assad not only appears to have failed, but it helped lead to the rise of ISIS. More recently, nasty contests for influence between Turkey and Russia have erupted in Syria and Libya, raising the prospect of a dangerous clash between those two major powers, especially in Syria.

In both arenas, the civil wars have displaced vast numbers of civilians, and the resulting refugee flows have caused severe disruptions and societal tensions in neighboring countries—including Washington’s European allies. Those episodes demonstrate why policies must be judged by their consequences, not their intentions. The observation that the road to Hell is paved with good intentions is especially true with respect to foreign military interventions. It is well past time for the architects of such debacles to accept responsibility for their awful handiwork.

Ted Galen Carpenter, a senior fellow in security studies at the Cato Institute and a contributing editor at the National Interest, is the author of 12 books and more than 850 articles on international affairs. This first appeared last month.