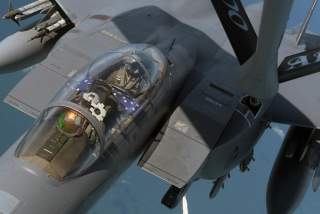 A Strike Eagle team, led by then Maj. Christopher M. Short, flew overhead during the early part of the Battle Robert’s Ridge. “And so we shot 500 rounds, 75 feet from friendlies,” Short said. “And my wingman made five passes and shot 500 rounds, having never done it before.”