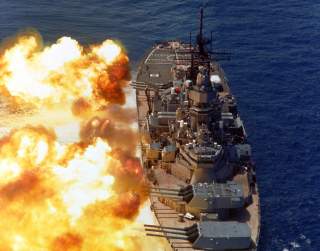 Key Point: In 1988 the USS Iowa loses, limping away to fight another day. Still, that’s not all exactly bad news for the Americans: Kirov was forced to expend its missiles against a battleship that didn’t sink, and wasn’t able to fulfill its primary mission of sinking aircraft carriers or savaging NATO’s Atlantic convoys. Kirov returns to her home port to rearm, but thanks to the carriers that were saved, there may not be a port to go home to.

Meanwhile, at sea, an equally titanic battle is about to take place. A Soviet Kirov-class battlecruiser, attempting to intercept a U.S. Navy carrier battle group, is intercepted by the battleship USS Iowa. The biggest ship-against-ship battle since the World War Two is about to begin. Who wins?