Battleship Wisconsin: Fought in Three Wars (And Could Fight Again?) 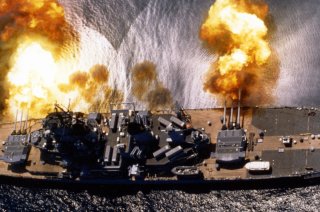 The second vessel of the United States Navy to be named in honor of the state of Wisconsin, the Iowa-class battleship USS Wisconsin (BB-64) was built at the Philadelphia Naval Shipyard and launched on December 7, 1943 – just two years after the Japanese sneak attack on Pearl Harbor. Sponsored by the wife of then Wisconsin Governor Walter Goodland, her motto was "Forward for Freedom."

As with her sister ships in the Iowa-class, BB-64 was designed as a "fast" battleship that mixed speed and firepower, which enabled her to maintain pace with a carrier strike force, while still sleek in design so as to be able to travel through the Panama Canal.

Armed with a main battery of 16-inch guns that could hit targets nearly twenty-four miles away with a variety of artillery shells, the Iowa-class were among the most heavily armed U.S. military ships ever put to see. Wisconsin's main battery consisted of nine 16-inch/50 caliber Mark 7 guns in three-gun turrets, which could fire 2,700-pound (1,225 kg) armor-piercing shells some 23 miles (42.6 km). Secondary batteries consisted of twenty 5-inch/38 caliber guns mounted in twin-gun dual-purpose (DP) turrets, which could hit targets up to nine miles (16.7 km) away.

Commissioned on April 16, 1944, with Captain Earl E. Stone in command, Wisconsin conducted her shakedown cruise in the British West Indies and was deployed to the Pacific where she took part in the naval operations in the Philippines, Iwo Jima, Okinawa and even conducted some of the final bombardments of the Japanese home islands. Wisconsin was assigned to the 5th Fleet under Adm. Raymond A. Spruance.

She was briefly decommissioned, and then reactivated for the Korean War, and provided naval gunfire support duties against enemy bunkers, command posts, and artillery positions. Wisconsin earned five battle stars for her World War II service, and one for the Korean War.

However, that wasn't the end of the line for USS Wisconsin.

President Ronald Reagan called for a 600-ship U.S. Navy in the 1980s, and as a result, the Iowa-class battleships were reactivated and upgraded with new combat systems that replaced many of the ships' smaller five-inch guns with a launcher for Harpoon anti-ship missiles, thirty-two Tomahawk cruise missiles and four Phalanx close-in weapon systems (CIWS). Initially equipped with 40mm anti-aircraft guns, during the Cold War those were replaced with missiles, electronic-warfare suites, and Phalanx anti-missile Gatling gun systems.

Along with her sister battleship, USS Missouri (BB-63), USS Wisconsin actually employed the new weapons in combat operations when she was deployed to the Persian Gulf as part of Operation Desert Storm. During the campaign the two World War II-era battleships launched Tomahawk missiles at Iraqi targets and conducted naval fire missions to convince the Iraqi Army that the coalition forces would engage with an amphibious assault, tying up thousands of Iraqi units.

USS Wisconsin was decommissioned again in 1991, but along with USS Iowa (BB-61), was maintained in the United States Navy reserve fleet in accordance with the National Defense Authorization Act of 1996 for potential use as a shore bombardment warship. Finally, on March 2006, the Secretary of the Navy exercised the authority to strike the two World War II battlewagons from the Naval Vessel Register (NVR). Along with the other Iowa-class battleships, Congress ordered that while each could be converted into museums, none could be altered in any way that would impair their respective military ability. Theoretically, Wisconsin and the other Iowa-class warships could be reactivated for service if the need came.

Today, USS Wisconsin is preserved as a museum ship in Norfolk, Virginia. She is listed on the National Register of Historic Places and remains one of the last American battleships to fire her guns in anger.