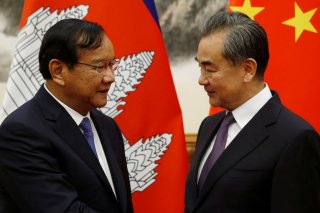 For the last four years, the Donald Trump administration has been quick to impose devastating sanctions on an array of unfriendly countries, despite widespread criticism that such moves are not only ineffective but exacerbate civilian suffering. Most strongmen do not care if their people starve; as Joshua Landis and Steven Simon write, “Those with the guns eat first.” Yet the Trump administration has pressed on, and in early October imposed crushing sanctions on Iran, a move European governments say will worsen Iranian access to humanitarian goods.

Yet sanctions are not the only tool of economic statecraft that Washington misuses—and has misused for decades. The United States has provided substantial support to the abusive security forces run by leaders in Phnom Penh, Cambodia, Naypyidaw, Myanmar, and beyond, even when doing so is both unnecessary and not anyway in the American interest. Buoyed by counterterrorism fervor and a sense that the United States need be truly global and all-encompassing in its presence, Washington ended up making itself complicit in human rights abuses carried out by Cambodia’s National Counter-Terrorism Committee and the Myanmar military, the Tatmadaw, for starters.

In our increasingly multipolar world where reputation matters more than in recent memory, the United States would be wise to more strategically wield its economic largess, particularly in regard to illiberal countries in the developing world. Washington can maintain a global footprint and compete with China without expanding the toolbox of abusive leaders abroad. Doing so, however, requires that the United States adopt a more holistic approach to foreign policy that decenters the military and focuses instead on soft power—on building widespread support for the United States by boosting humanitarian efforts that truly help those who are suffering, rather than backing the forces oppressing those unlucky enough to be without the guns.

After 9/11 and the 2002 Bali bombings, the George W. Bush administration feared that Cambodia, of all places, could become a terrorist safe haven. The logic was such: Cambodia, as an undeveloped country with porous borders, a lacking rule of law, and an indigenous Cham Muslim population, was on track to become something of a terrorist launching point in Southeast Asia. The fact that the Bali bomber had for some months lived and was eventually arrested in Cambodia only augmented Washington’s fears.

All this, coupled with post-9/11 fervor, led Washington to overlook the fact that the Cham Muslims had no interest in Wahhabist Islam, that Cambodia had no recent terrorist attacks besides those carried out by the Cambodian state, and that any securitized attempts to address American concerns would require engaging the autocratic Hun Sen.

And so, that is what Washington did.

In 2004, the George W. Bush administration provided millions of dollars to create Cambodia’s National Counter-Terrorism Committee (NCTC), which was chaired by Hun Sen, the prime minister. Paradoxically, however, the Bush administration sidestepped the U.S. Senate’s conclusion that, after reviewing a 1997 attack on a Cambodian opposition leader, “Hun Sen in fact bears ultimate responsibility for this act of terrorism.”

By 2008, meanwhile, any semblance of an insurgent terrorist threat had dissipated from Cambodia. Besides one foreign-led plot against the British and American embassies—foiled in 2004—the State Department has for years reported no significant terrorism activity in the country.

In 2008, though, Hun Sen’s son became head of the NCTC, increasingly wielding it as a political force. Ignoring human rights groups’ concerns, the Barack Obama administration in 2012 even expanded counterterrorism assistance to Cambodia.

The NCTC has for the better part of a decade operated as Hun Sen’s secret police force, cracking down on members of the opposition, Buddhist monks, land rights protestors, and even protesting garment workers. Hun Sen now regularly uses the “terrorist” label to target these and other perceived Fifth Columns. Just a few months ago, he even decried those “who spread fake news” about the COVID-19 pandemic “as terrorists.”

This Cambodia vignette is instructive, demonstrating how by misinterpreting or even ignoring the facts on the ground and pushing forward with a security-centric approach the United States ended up on the side of an autocrat—rather than that of a would-be democratizer—diminishing our reputation in the process. (President Obama’s refusal to meet with human rights advocates during his 2012 visit to Cambodia prompted similar local frustration.)

Another example is Myanmar, from which Washington pulled military assistance in 2017 only after the Tatmadaw ramped up their long-running abuses of the Muslim Rohingya under the guise of counterterrorism.

Washington did not see this wave of violence coming, even though the Burmese state has historically discriminated against the Rohingya, refusing to count them among the nation’s 135 officially recognized ethnic groups. Even as researchers and human rights groups started using terms like “ethnic cleansing” and “genocide” to describe the Tatmadaw’s attacks on the Rohingya, the Obama administration kept pursuing rapprochement with Myanmar.

Further instances of such misguided U.S. support for abusive security and military forces abound through both modern and recent history, from Indonesia to Egypt and beyond.

This approach is not only morally deficient but also strategically unwise. By bolstering security and military forces as a tool of statecraft, the United States too often places itself on the side of corrupt and violent elites, rather than that of the people, thereby weakening our credibility as a global champion of liberalism.

In an era of rising competition with China—in which Beijing portrays itself as benevolent in contrast to American “imperialism”—Washington would be wise to shift its financial support to humanitarian efforts whose success will engender public support for the United States. Widespread public appreciation for the United States, in turn, applies pressure on ruling regimes to remain on reasonably good terms with Washington (or at least maintain a veneer of doing so).

In the developing world, the United States should aim to fill the gaps left by autocratic regimes’ kleptocracy, such as healthcare, development, and education. These are tangible fronts on which American aid can make a positive difference for wide swaths of the population.

To ensure the soft power success of these efforts, American diplomats should make themselves present, particularly at the sites of U.S. investment, and speak with local media. In so doing, they will ensure that ordinary people know that the United States, rather than their ruling regime or even China, is improving their lives.

Such U.S. reform is today even more needed, given our world’s increasingly multipolar nature. China builds global influence in the developing world by cozying up to autocrats and lavishing them with infrastructure, palaces, and other investments. What China does not do as effectively, however, is provide benefits for the average citizen. Rather, Chinese development is prone to engender anti-Chinese sentiment, as in Cambodia and Pakistan, for example.

Rising global anti-Chinese state sentiment thus presents a great opportunity for the United States. Despite our disquieting last four years, Washington can further outflank Beijing on the soft power front, on which we still have an advantage, by shifting our resources away from repressive security forces to efforts that positively impact people’s daily lives.

As the world continues to struggle with the economic fallout from the coronavirus crisis—for which more than a few developing countries blame China—American support for these sectors is of the utmost importance, both prosaically for those suffering and strategically for U.S. influence-building efforts.

Successful American soft power will not in itself prevent countries from embracing Beijing, but it does prevent them from fully rebuking the United States in favor of China, for doing so will prompt widespread public discontent. Strong soft power bonafides, not support for abusive militaries, are the building blocks on which Washington can build more meaningful and mutually beneficial partnerships moving forward.

Indeed, the United States must engage more carefully with the developing countries it aims to keep out of China’s orbit. Neither imposing devastating sanctions on them nor collaborating with their repressive autocrats will do the job.

It is high time that the United States recognize the power of the masses, rather than place our hopes in the illiberal leaders keeping them down.

Charles Dunst is a Visiting Scholar at the East-West Center in Washington and an Associate at LSE IDEAS, the London School of Economics’ foreign policy think tank. Twitter: @CharlesDunst