Beijing Will Not Let Go of Hong Kong 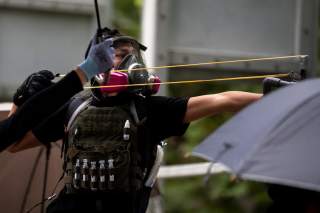 Key point: China will certainly end the crisis, but the question is how.

Whatever the outcome of the current protests, Hong Kong will not return to "normal."

No political compromise will satisfy both sides. At its core, the protest movement in Hong Kong is about self-determination: the right of Hong Kong to choose its own laws and leadership — and thus its own path. This view is anathema to Beijing's core interest in national unity and eventual complete unification.

Hong Kong's unique status will either continue to erode, removing once and for all the fiction of "one country, two systems," or Hong Kong will break politically from the mainland, fracturing China's 70-year drive to reconstitute the nation. The odds are stacked against that second outcome.

What's at Stake for Beijing?

Beijing's core interest is in the unification and unity of China, to include troubled areas like Tibet and Xinjiang, the former colonial holdings of Macao and Hong Kong, and of course Taiwan. Without complete reunification, Beijing feels China will remain vulnerable to foreign interference, and its strategic position is weakened. While Beijing will experiment with limited local elections in the mainland, and tolerate some differences in politics in Hong Kong, it will not accept any sentiments that may be deemed separatist, nor will it brook any challenge to the supremacy of the Communist Party. Hong Kong is not merely a financial hub; it is a piece of China, and Beijing will ensure its integration into the Chinese system.

The Erosion of Hong Kong's Uniqueness

For well over a decade, through travel to Hong Kong and in conversations with expatriates and Hong Kongers alike, it has been clear to me that Hong Kong's trajectory was one of slow but inevitable assimilation into the mainland. This even came across in visits to the mainland for discussions with Chinese researchers and academics. On the surface, this eventuality seems obvious. After all, the 1984 agreement that shaped the handover from British to Chinese sovereignty in 1997 guaranteed only 50 years of continuity for the unique Hong Kong system. And Hong Kong's economic role, while still important, is no longer vital, as there are more options for financial and trade flows to and from mainland China.

But the pace of change has been faster than some people had hoped. By the final years of Chinese President Hu Jintao's administration, it was apparent that the timeline for broader integration was accelerating. Among other factors, this was driven by rising Chinese nationalism surrounding the 2008 Summer Olympics, the rapid expansion of the Chinese economy, and shifts in banking and financial regulations that reduced the significance of Hong Kong as a gateway between China and the world.

This graphic shows line charts and a bar graph that compares the GDPs of Hong Kong and China.

China's confidence in its own international position following the global financial crisis, when China and the United States appeared to emerge as near-equals, only reinforced the belief that Beijing was growing less concerned about international opinion. In 2012, students in Hong Kong pushed back against what they saw as growing assertiveness by Beijing, and their protests blocked proposals for national moral education in the city, seen as an attempt to force mainland ideas on the more open Hong Kong.

When Xi Jinping took China's presidency in 2013, his nationalist and neo-Maoist rhetoric and behavior stirred rising concerns in parts of Hong Kong that Beijing would only speed up the reintegration of Hong Kong. Social tensions were high between mainlanders and Hong Kongers at the time amid complaints of shortages and price hikes due to parallel traders. In early 2014, when renovations were completed on the PLA Forces Hong Kong Building, it was seen as more than symbolic that the building was now emblazoned with the People's Liberation Army logo and giant flashing lights at night that read China's People's Liberation Army.

But it was the August 2014 decision by China's National People's Congress to restrict the candidates for Hong Kong's 2017 chief executive election to two or three individuals vetted by Beijing that sparked the nearly 80-day-long Umbrella Movement. The loose conglomeration of different protest movements, also known as Occupy Central, was to resist restrictions on elections and instead demand that Hong Kong have the complete universal suffrage promised by the Basic Law.

The movement, modeled in part on the 2011 Occupy movement in the United States, included attempts to permanently block critical roadways, with protesters setting up barricades and camping out. This did lead to significant disruptions to business and transportation but it also contributed to protest fatigue, and with waning support and growing concern about the emergence of violent elements, the Umbrella Movement eventually folded. But it served as both a training ground and as a way to focus attention on the perceived erosion of political freedoms by Beijing.

In various events and articles in 2017 commemorating the 20th anniversary of the handover of Hong Kong to China, mainland political and military officials emphasized the significant role of the Hong Kong PLA garrison as both a military and political force and an important element in strengthening Hong Kong patriotism for China. The message, following on the heels of the chief executive election that included only candidates preapproved by Beijing, was that Hong Kong was a part of China and that the path to reunification was both inevitable and a patriotic duty.

This broader context triggered the strong reaction against a February 2019 proposal to adjust Hong Kong's laws to allow extradition requests to other parts of China, including Taiwan, Macao and the mainland. In addition, to avoid tipping off potential fugitives, the law proposed bypassing the current requirement for legislative review, granting the chief executive the power to approve individual extradition requests.

Hong Kong politicians and activists quickly labeled this proposal as an attempt by the mainland and the chief executive to allow secret extraditions of pro-democracy activists and others who oppose aspects of Beijing's polities. Rather than launch another Occupy-style movement, various groups called for protests and rallies beginning in March, with a mass protest in early June as the legislature revealed it was likely to vote on the new extradition law earlier than expected.

As protests expanded in scope and scale, five basic demands emerged. The first was the complete withdrawal of the extradition bill, something that finally happened in early September. Three other demands related to the labeling of protesters as rioters, calls for the release and exoneration of protesters, and an independent inquiry into police actions. For each of these demands, there is room for Hong Kong to offer some partial concession without risking a significant challenge to Beijing's interests.

But the final demand is unacceptable to Beijing: the resignation of Chief Executive Carrie Lam and universal suffrage for legislative and chief executive elections — in other words, the ability for Hong Kongers to choose candidates even if they are not Beijing-friendly. This demand is, at its core, a call for self-determination and is one that Beijing will simply not tolerate.

If we consider Beijing's biggest concern to be the financial role of Hong Kong or the international perception of internal Chinese actions, then there are clearly strong constraints to Beijing's options in Hong Kong. But if the core issue is sovereignty amid a broader nationalist drive, then the constraints start to slip.

This does not mean that Beijing has any interest in deploying the People's Armed Police, much less the People's Liberation Army, to restore order in Hong Kong — the social, political and economic cost of such a move would be consequential. The best path for Beijing would be one where protests wind down in Hong Kong without intervention. But if it comes to a question of Chinese sovereignty versus a financial and economic disruption, there is little question which way Beijing will choose.

The last decade of global behavior suggests that Beijing may have more confidence in taking actions with manageable international repercussions. China has watched Russia intervene physically in both Georgia and Ukraine, and while it has faced sanctions, Moscow has also been able to retain a strong role in shaping the balance of power in the Middle East, and in standing up to shifts in U.S. strategic posture. Growing collaboration between Russia and China in reshaping the global order to better fit their own worldview and concepts of government's role in economics and society will ensure that Moscow will insulate China from significant United Nations actions.

China's economic importance around the world, coupled with the waning willingness of Western countries to pursue purely ideological policies, may provide Beijing with a sense of greater room to maneuver. In short, China is in a much stronger position internationally today than it was, say, in 1989, and its economic and political reach may insulate it from the fullest impact of an international response to possible intervention in Hong Kong.

The Future of Hong Kong

Whether China intervenes directly, the Hong Kong police break the back of the protest movement or some minor political accommodation coupled with protest fatigue sees the movement diminished, Hong Kong will not simply slide back into a business-as-usual mode. The path of more rapid integration, of a drive to press Hong Kongers to engender patriotism for greater China and the weakening significance of Hong Kong as a unique space are all recognized.