In Beirut Blast Investigation, Lebanon’s Judiciary Is Under Siege 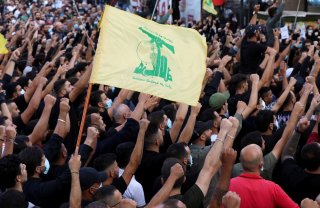 In Lebanon, getting to the truth is the fastest way to put yourself in danger, especially when showing the political elite that they are not above the law. That is exactly what Judge Tarik Bitar is doing by fighting for the victims of the August 2020 blast in Beirut’s port that left 200 people dead. His requests to call politicians to answer questions on the details of that horrific day are rattling some political parties to the point that it has led to violence.

Now clashes between predominantly Shi’ite Hezbollah and its ally the Amal Movement and the Lebanese Forces, a majority Christian right-wing party, have killed at least seven people. The fighting took place in a Christian suburb of Tayouneh in Beirut, with both sides blaming each other for instigating the violence. The Lebanese army was deployed to stop the violence and bring the area back to a degree of normalcy. Social media circulated a video of one Lebanese soldier firing on a pro-Hezbollah protester. The Lebanese army said the man is being investigated.

Hezbollah and Amal have accused the Christian Lebanese Forces of organizing an ambush against their peaceful protest. The leader of the Lebanese Forces, Dr. Samir Geagea, described what happened as a “mini-May 7th” in reference to Hezbollah’s takeover of Beirut in 2008.

Army officials reported to the media they arrested nineteen suspects connected to the shooting, with sources indicating it was the Lebanese Forces who fired the first shots with snipers from rooftops. This triggered retaliation from Hezbollah supporters using heavier weapons, including RPGs and AK-47s. Residents of Tayouneh fled for their lives as sporadic violence between different sects resurrected memories of Lebanon’s fifteen-year civil war.

The situation started to unravel after Hezbollah and its allies organized their supporters to march on the Justice Palace to condemn Judge Bitar’s supposed partiality on the port case. As a result of Bitar’s efforts to discover those responsible for leaving 2,700 tons of ammonium nitrate in Beirut’s port, he has found himself making enemies within multiple political forces in Lebanon who desire him gone.

As of October 12, the explosion inquiry has been suspended on the grounds that Bitar is using his legal authority for political purposes by calling on specific politicians. This began with Bitar seeking to strip the immunity of parliament members and former ministers, including Ghazi Zaiter and Ali Hassan Khalil who are from the Amal Shi’ite political party. Bitar requested they appear before the court to share their testimonies on the matter. The judge issued a subpoena for former Prime Minister Hassan Diab after he failed to appear for questioning on details of his knowledge of the ammonium nitrate case.

Secretary-General Hassan Nasrallah of Hezbollah issued harsh criticism in a recent speech, arguing Bitar is not only biased but is “politically targeting” officials in his investigation. The leader of Lebanon’s Iran-backed party delivered a harsh rebuttal of Bitar’s credibility, saying he should be replaced by someone who is “transparent.” For now, Bitar is not budging and remains in charge of the investigation.

A supporter of Bitar spoke on the condition of anonymity, saying the judge has no party allegiance. According to this individual, this is why some politicians have aggressively fought for his removal—he cannot be controlled. However, that will not stop some from trying.

Last month, Bitar confirmed he received a threatening letter through an unspecified intermediary, which Lebanese media reported was a journalist. According to multiple sources, the message was from a high-ranking Hezbollah figure and said, "We've had it up to our noses with you. We will stay with you until the end of this legal path, but if it doesn't work out, we will usurp you."

This language is contemptible and further proves that Lebanon’s independent judiciary is under serious threat. Worse, it is not only Hezbollah and Amal undermining and threatening the judge. Indeed, Nohad Machnouk, the former Interior Minister Nohad Machnouk and a member of the “Future bloc” party, filed a lawsuit against Bitar for his methods of investigating the port blast and demanded his immediate removal. Ironically, the Future bloc and Hezbollah have historically been rivals. Now, they suddenly agree on hindering Bitar’s efforts, showing that many in positions of authority have an interest in covering up connections to the blast.

Political groups have been working to prevent the investigation for some time. If successful, Bitar would be the second legal investigator to be fired from this case. In February, a court removed Judge Fadi Sawan, who was originally appointed to preside over the case, further delaying a measure of peace for the grieving families. Such delays, alongside efforts to remove judges, only empower Hezbollah and other elements within the elite to believe they can undermine Lebanon’s judiciary through intimidation, while simultaneously telling the Lebanese people that they too want the truth about how the ammonium nitrate arrived in Beirut.

The doublespeak is explicit. Lebanese officials who are abusing their positions of power to break the law are demanding the removal of Bitar for following it, showing him they carry the gavel. Some within the newly formed cabinet are prepared to steep to new lows, even at the cost of their livelihood.

After more than a year of arguing over how to form a government, some members of the opposition, including Hezbollah, are prepared to plunge the Lebanese people into more chaos and hardship by threatening to resign from the cabinet, as a show of anger with Bitar. Any progress Lebanon made in improving relations with the international community will be reversed, potentially leaving the nation starved of billions of dollars worth of aid to save its economy from one of the worst crises in over a century, according to the world bank.

To stop this, Lebanon’s judiciary needs full solidarity from its people, the international community, and Lebanese leaders who want to save the country. Prime Minister Najib Mikati said to a Reuters journalist that removing Bitar from his post was not up to politicians. He declared Friday to be a day of national mourning. That said, it would seem burying lives is easier for Lebanese leaders than saving them. Lebanon does not need more victims—it needs to follow the law and honor the victims of the August Beirut blast. That will not happen with time—it will only come with brave action from people like Bitar and those willing to protect him and the judiciary as a whole.