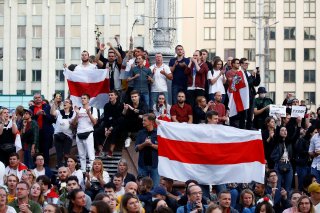 Alexander Lukashenko has secured his sixth term as president of Belarus, on the heels of an explosive election colored by street violence and foreign intrigue. The fallout from Belarus’s presidential election, and the events preceding it, portend a grim future for Lukashenko’s delicate geopolitical balancing act between Eurasia and the West.

The post-Soviet state of Belarus held its first and last competitive election in 1994. Lukashenko, then a young politician who previously served as the director of a Soviet state farm (Kolkhoz), won by a landslide on a platform opposing the sweeping liberalization and privatization measures being pursued by former Russian president Boris Yeltsin. Lukashenko went on to govern through a style best described as a kind of soft authoritarianism, discreetly but firmly excising all traces of political opposition whilst building a power base around a distinctly Soviet type of welfare statism that jettisoned markets and private property in favor of full employment and guaranteed housing.

Lukashenko’s state-centered economic model has consistently proven incapable of generating per capita wealth, and is unsustainable without external support. Indeed, Lukashenko’s rule has proven so long-lived partly because the Belarusian president has an undeniable talent for cultivating beneficial trade relationships with key strategic partners, including Russia, the United States, the EU, and China. This approach, which Lukashenko has previously described as a “multi-vector foreign policy,” is premised on balancing negotiating partners against one another to secure the best possible trade terms. Take, for instance, Lukashenko’s decision to meet with State Secretary Pompeo amidst contentious oil price negotiations with the Kremlin. The meeting appeared to bear fruit—several months later, Belarus ordered its first shipment of U.S. oil while trade talks with Moscow continued to sputter. Even as Lukashenko deftly played Moscow and Washington off against one another, he also secured a 500 million dollar loan from Beijing earlier that year as a form of geopolitical leverage against both Russia and the United States.

Lukashenko has operated in this vein for decades, but his complex web of contradicting foreign relationships has proven increasingly difficult to maintain with every passing election. Latent tensions culminated during the run-up to the 2020 Belarusian presidential election, held late last week on August 9. Facing an unprecedented wave of public discontent over his rule, Lukashenko made a startling announcement in late July: Belarusian authorities had arrested thirty-three Russian mercenaries for allegedly plotting “terrorist acts” to “destabilize” Belarus ahead of the presidential election. Lukashenko routinely dabbles in murky allegations of foreign sabotage as a tactic to rally popular support ahead of elections, but this time was different—though the Kremlin stayed mum, Russia’s media and political commentary sphere erupted over developments in Belarus. Kiev asked for the mercenaries to be extradited on suspected charges of aiding Russian-backed separatists in eastern Ukraine, a move that prominent Russian politician Konstantin Zatulin said would constitute a “red line” on the level of military aggression; Zatulin added that Lukashenko’s allegations of Russian interference “raise questions about his sanity.”

As relations between Minsk and Moscow teetered on the brink of collapse, Lukashenko performed a stunning volte-face. Allegations of Russian meddling abruptly gave way to a much different narrative of foreign interference; namely, that the ongoing protests in Minsk are part of a broader British-Polish-Czech intelligence operation to overthrow Lukashenko. Police forces are employing increasingly draconian methods to quell the protests, including near-death beatings and the use of live fire in the days following the election—as of the time of writing, two protesters have been killed.

The Belarusian election commission predictably reported that Lukashenko has won 80 percent of the vote, but it is impossible to gauge Lukashenko’s actual level of public support given the insular nature of his government; in point of fact, most forms of independent polling are banned by Belorusian law.

If anything is clear from the 2020 election, it is that Lukashenko’s sixth coronation is a geopolitical poisoned chalice. Secretary Pompeo has all but abandoned his pragmatic approach of normalizing relations with Lukashenko without demanding internal changes in Belarus. Instead, Pompeo joined the EU in dismissing the election as fraudulent and threatening sanctions over human rights abuses. With this de facto refusal to recognize Lukashenko’s presidency, White House plans to dispatch the first U.S. ambassador to Belarus in over a decade are now gravely imperiled. Tempting as it is to conclude that relations between Minsk and Washington are back to square one, the reality is even bleaker: having suffered a biting public rebuke at the hands of western leaders, Lukashenko will be driven to further deepen his economic and military ties with Moscow—the “multi-vector foreign policy” that has characterized the past two decades of his rule is, for all intents and purposes, dead.

Nor is it clear that the Kremlin is at all prepared to deal with Minsk on terms favorable to Lukashenko. The full extent of the damage done to Russian-Belarusian relations over the past several weeks has yet to be determined; Lukashenko has not committed to releasing the thirty-three arrested Russian mercenaries, a continued source of frustration for Russian politicians and unfiltered anger from Russia’s most prominent political commentators. Moscow, which has long tried to condition oil subsidies to Belarus on deeper political and economic integration between the two countries, may very well exploit Lukashenko’s vulnerability at home and isolation abroad to press for some type of unification scheme.

Lukashenko has managed to cling to power, for now. But as the beleaguered Belarusian president reckons with the grim aftermath of his reelection victory, what was once a vast horizon of rich geopolitical opportunities looks increasingly like a hobson’s choice between utter isolation or the very same Russian suzerainty arrangement that he has spent the last two decades trying to avoid.