The Belarus Uprising: A Repeat of Ukraine? 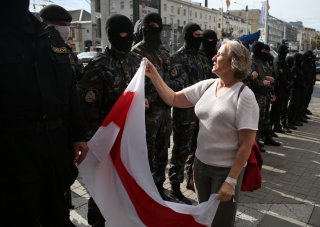 America’s great power competitors, China and Russia, are pushing back against the free world. China’s arc stretches from Hong Kong and the South China Sea through the Himalaya border with India and along the Belt and Road intrusions far into Europe. Its debt-trap strategy on the African continent is binding ever more governments to it. Meanwhile, Russia continues its expansionism from Syria, through Crimea and the Donbass all the way to Libya. Across these vast regions, they trample on democracy and the rule of the law, with the ultimate intention of pushing back against American influence. Belarus is becoming the latest theater of competition. Washington should make it unambiguously clear that Russian meddling against the democratic will of the Belorussian people will not stand.

President Donald Trump has succeeded in keeping out of new wars. His firm declaration of his intent to safeguard American national interests has held adversaries at bay, and he has maintained a strong enough defense posture so as not to have to respond to provocations, such as from Iran. Yet an aggressive move by Russia in Belarus on the scale of what took place in Ukraine would be another matter altogether. It is urgent for the United States to underscore how serious the consequences will be if Moscow takes an adventurist wrong step. Vladimir Putin should not think that he can occupy Minsk the way Brezhnev occupied Prague—but the United States should be prepared to act if he tries. This requires mobilization on multiple levels.

First, it is urgent to launch intensive diplomatic consultation with all the NATO members. The transatlantic alliance is not in the best of shape at the moment, to say the least. Some European allies bear a lot of the blame. The world just witnessed the vote of the Security Council where England, France and Germany chose to abstain from extending the arms embargo on Iran, as if more arms in the hands of the Mullahs will bring peace to the Middle East. The E3 are clearly upset at the Trump administration on a range of issues. Plus, European leaders tend to underestimate security threats. In contrast though, the prospect of Russian troops marching through Belarus to the border of the EU may prompt them to think again about the need for a robust defense cooperation. A repeat of the Yugoslav wars may be looming in the European northeast, including another wave of refugees, and Europeans will have to rediscover how much they need the transatlantic alliance. It is time for Washington’s diplomatic corps to be reminding them of the dangers in their neighborhood.

Second, diplomacy has to lay the groundwork for a suspension of the 1997 NATO Russia Founding Act. That post-Cold War document was premised on a non-adversarial relationship with Russia, and the expectation that Russia would contribute to European stability, democracy and peace. Moscow has broken that agreement time and again, in Ukraine, through assassinations in the United Kingdom and in Germany, and through the suppression of democratic forces domestically. The hour has long passed when NATO and the U.S. in particular should be reticent about stationing troops in the Central European countries that became free after 1989. NATO’s European members should hear America make that case and join in supporting defense build ups along the new eastern front that stretches from Estonia to Bulgaria. That troop repositioning will take considerable diplomatic and logistical efforts. The time to start is now. The decision to move troops from Germany to Poland is an auspicious first start.

Third, precisely those eastern flank countries need clear reassurance of American support. Fortunately, the Trump administration has succeeded in building firmer ties in this “new Europe,” but more could be done. A ministerial level gathering in Washington in the fall, including leaders from the Baltics, the Visegrad four, Rumania and Bulgaria would be an opportunity to signal Washington’s firm commitment to friends in those countries and to counteract the Kremlin disinformation campaign that is persistently active and outstrips the State Department’s own meager communication strategies. Yet of equal importance, a Washington gathering of the partners in Eastern Europe would signal to the world that the front line of freedom will not be surrendered to Putin’s addiction to military adventures abroad.

Fourth, it is time as well to pressure “old Europe,” especially the former front-line state, Germany, to live up to its commitments. At stake is not only the evergreen problem of burden-sharing, German underspending on defense. Even more glaring is Berlin’s persistence in collaboration with Russia on projects like the Nord Stream 2 pipeline, despite objections of its European neighbors, despite Crimea, and despite killings carried out by Russian agents in Berlin, nearly in the shadow of the Chancellery. Germany should use its considerable influence in Moscow to forestall any meddling. To do so, it could make completion and operation of the pipeline contingent on Russia staying out of Belarus. Putin already has too much foreign fighting on his hands.

Belarus is part of the European theater, but it is also a piece of the encompassing global competition. Weakness in Northeast Europe will tempt adversaries in East Asia. One has to plan for worst case scenarios: a conventional Russian advance in Belarus could be followed by a Chinese move on Hong Kong or even Taiwan. Preventing such catastrophic developments requires clear expressions of commitment, fortifying our alliance and building a defense posture appropriate to today’s circumstances, not to the last war.

Russell A. Berman is Walter A. Haas Professor in the Humanities at Stanford University and a Senior Fellow at the Hoover Institution.

Kiron Skinner is the Taube Professor at Carnegie Mellon University, where she directs the Institute for Politics and Strategy, and a Research Fellow at the Hoover Institution.