Believe It or Not, AH-1 Attack Helicopters Used to be Dogfighters 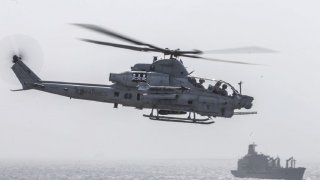