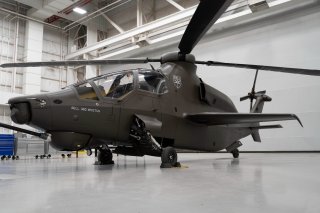 The new helicopter, now shown in a series of just-released, sleek-looking photographs, is designed with a smooth, stealthy, rounded fuselage, single rotor, back tail rotor, and internal weapons bay that are intended to reduce radar signature, increase speed and agility, introduce new sensing and targeting systems, and fire a new generation of long-range, precise air-attack weapons.

The aircraft is now 90 percent built, developers explain, as Bell engineers await the anticipated arrival of the helicopter’s new engine, the highly efficient, new Improved Turbine Engine Program. Once the engine arrives, the attack helicopter will essentially be ready to fly. Bell’s approach seeks to accommodate, anticipate, and advance the Army’s requirements for the new aircraft, which will fly alongside and potentially replace some upgraded Apache attack helicopters. Bell’s Invictus 360 is now being evaluated by the Army alongside Lockheed-Sikorsky’s Raider X FARA offering.

“The FARA program for us with the United States Army is really two baselines. One is the competitive prototype. We are over 90% built. Essentially, we're waiting on the engine, which will be released from GE to the Army here later this year.  But we're also developing the Increment One weapon system. So I've got a lot of engineers that are doing weapons system development,” Chris Gehler, vice president and program director for FARA at Bell, told The National Interest in an interview.

And while the Invictus 360 helicopter is built with an ability to fire Hellfire, JAGM, and other cutting-edge weapons systems, key elements of its future arsenal remain an open question. This may in large measure be by design, given that emerging technologies are presenting the U.S. Army with new possible weapons and capabilities, including lasers, electronic warfare systems, artificial intelligence-enabled in-flight course correcting, and longer-range, more precise targeting systems. Therefore, it would make sense that engineers would seek to build the aircraft with a specific mind to upgradeability.

Alongside the many open questions regarding the aircraft’s future weapons configuration, the Army has set clear parameters for FARA to fire a 20mm cannon.