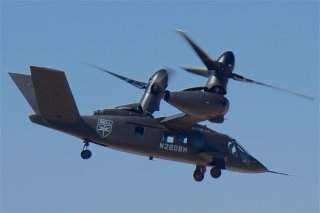 Bell’s V-280 Valor tiltrotor and Lockheed-Sikorsky-Boeing’s Defiant X are the two main industry competitors now being evaluated by the Army against a set of ambitious requirements intended to prepare the service for future war environments into the 2050s and beyond. Bell’s V-280 Valor, for instance, has hit speeds faster than 300 knots and doubled the range of the existing Black Hawk.

What about an ability to operate under enemy small arms fire and land in a contested landing zone? Naturally, speed and agility greatly reduce vulnerability to enemy fire, but Bell developers have additionally explained that their tiltrotor aircraft has exceptional high-speed maneuvering capabilities which are made possible by having a wing as the primary lifter. This high-speed flight provides an advantage in avoiding enemy engagements. When you are slow and close to the objective, the aircraft maneuvers better than a Blackhawk and can accelerate extremely quickly to get out of the area after pickup and drop-off of troops is complete.

The V-280’s high speed and maneuverability drastically increase its survivability over that of existing aircraft. The V-280 doesn’t have large rotor systems with giant masts to worry about during aggressive maneuvering, so if you start taking fire from a threat, you can aggressively bank the aircraft on its side like a fighter jet, rapidly moving away from the threat while maintaining a positive energy state on the aircraft.

The bottom line is that the V-280 tiltrotor is designed to do everything the Army does with its current medium-lift assault aircraft while providing the requested long-range and high-speed capability to dominate on the modern battlefield. Tiltrotors have proven that no other vertical takeoff and landing (VTOL) aircraft configuration can build combat power where the ground force commander needs it at the same speed and efficiency as a tiltrotor.

Ultimately, the V-280’s revolutionary tiltrotor design seeks to achieve transformational speed, range, and agility which greatly enhance the Army’s ability to mass combat power on the objective. The V-280 occupies virtually the exact same footprint on the landing zone as the Army’s Blackhawk and has demonstrated the agility and maneuverability necessary to operate and survive in low-altitude terrain flight at high speeds and long ranges.