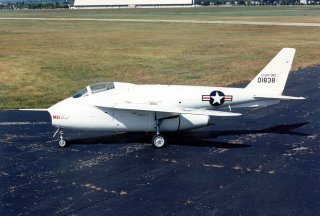 While aircraft are often described as being “fixed-wing,” the fact is that some aren’t quite as fixed as others. Even before World War II some aircraft were designed with wings that could fold, which allowed up to 50 percent more aircraft to be stored aboard aircraft carriers and by the end of the war folding wings were essentially standard equipment on nearly every carrier-based aircraft, and there have been very few exceptions since. More recently, Boeing showed off its 777x, which featured folding wingtips that would allow the commercial airliners to fit at airport gates where existing 777s currently operate but still provide the extra lift from the extended wingspan.

In the case of the World War II carrier-based aircraft and even the 777x, the wings still remained fixed while in flight. The Bell X-5 was the first high-performance airplane that could vary the sweepback of its wings in flight.

The X-5 was actually based on— and even closely resembled—the German-designed Messerschmitt P. 1101, a squat little airframe that was incomplete and never flew. It was captured by the American military at the end of the Second World War and closely evaluated. The P. 1101 was a single-seat, single-engine jet-powered fight aircraft and it was the first to feature variable-sweep wings, but these were altered manually before a flight when the aircraft was on the ground. As the single prototype, which was only 80 percent complete, was never tested it isn't clear how well it would have performed.

But the P. 1011 caught the eye of American aircraft engineers who borrowed heavily in terms of the overall design for the X-5 program, which was developed as an American/NATO low-cost tactical fighter. Unlike the P. 1011, in the X-5 the pilot had full control over the sweep of the aircraft's wings while in-flight. The wing sweep ranged from 20 to 60 degrees. This allowed the pilot to adapt the sweep to the action in hand, such as take-off, landing, or cruise and supply more or less drag to the airframe as was required.

Two X-5s were built and the first flight occurred in June 1951. This verified the National Advisory Committee for Aeronautics (NACA) wind-tunnel predictions of reduced drag and improved performance that resulted from increased wing sweep as the aircraft approached Mach 1. As the wings of the aircraft sweep back the center of gravity and center of pressure changed, and to compensate the entire wing assembly simultaneously moved forward on rails within the fuselage. The change from 20 to 60 degrees, which also required that the wings be moved about twenty-seven inches forward from their starting position, took about twenty seconds. While this was handled electronically, the pilot could hand crank the wings back as necessary as the X-5 could not safely land with a sweep angle that was greater than 40 degrees.

The aircraft was not without shortcomings, including the fact that it was not considered a comfortable airplane to fly and was difficult to get out of a spin. Tragically one of the two fighters was destroyed in October 1953 when it failed to recover from a spin at 60 degrees sweepback. Its pilot, Major Raymond Popson was killed in the accident.

The other aircraft was used in testing until, October 25, 1955, when under the controls of High-Speed Flight Station pilot Neil A. Armstrong, the landing gear door separated. The plane was subsequently grounded—having made 122 NACA flights in total. The aircraft was then sent to the National Museum of the United States Aircraft, where it remains on display today.

The lasting legacy of the Bell X-5 could be seen in the variable-sweep wing aircraft to follow, from the F-111, the F-14 and the B-1 in the United States, as well as Soviet Union's Su-22 and Su-24 and the European Tornado.