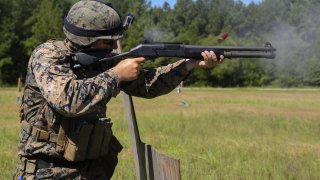 Shotguns are a staple of American history. They’ve been used in every major war we’ve participated in since the Philippine Insurrection and were used alongside the repeating rifles of the 1800s to help win the west. The Benelli carries on this rich lineage in the only way a semi-auto shotgun could—a lot of firepower.

For a shotgun, the thing that surprises me the most is the lack of recoil for a semi-automatic shotgun, making it dead-on accurate at 20 yards or less—with comparable shot-groupings to an M4 Carbine at 25 yards or less. The sights on the M4 (similar to that of an M1 Garand) make this an unusual shotgun, as most do not have easy-aim sights for accurate shooting.

Speaking of accurate shooting, the only way you can miss with the M4 at close-range is if you intend to miss. With a pistol grip, gas-piston operation and excellent recoil distribution, this is made for rapid-fire accuracy—a rarity for sure.

The Benelli M4 is super rugged. In fact, it was designed for the U.S. Marine Corps. I’ve fired hundreds of rounds, dropped it and even did a few mud tests, and it STILL worked flawlessly. The ARGO gas system (dual-piston) not only self-cleans, it’s incredibly simple, meaning this weapon is not “above” anyone.

I love the guarantee of function with the M4, its simplicity makes it so durable that even if I dropped this thing, threw it in filth or water, I know it will fire when I squeeze that smooth trigger. Now featuring the use of Cerakote, it’s even more resistant to submersion in water which is just another selling point for a tactical shotgun.

When engaged in close-quarters combat, you need a weapon that doesn’t fail, and the M4 is just that.

Being a gas-operated firearm, the handling of this weapon is far smoother than an inertia-operated firearm, like many of Benelli’s other designs. Personally, the Benelli M4 handles far better for those already used to handling AR or M4 Carbine platforms due to its low recoil.

Having long arms, the retractable stock and ergonomic pistol grip excel in CQB environments. And in my opinion, it’s a bit more reactive than a pump-action shotgun such as the Mossberg 500, CZ Sharp Tail, or Remington 870 in a do-or-die moment.

The only downside handling-wise is that gas-operated firearms require more frequent cleaning; however the M4 is one of the lowest maintenance firearms in this category and needs nowhere near the amount of cleaning that some gas-operated rifles would. Rugged, low-maintenance, and guaranteed to work—why would anyone dislike this piece of art?

I love the feel of the trigger on the Benelli, despite being a seven pound pull. The heavier trigger might be difficult for those with lack of experience, but the ergonomics of this weapon allow you to get used to it quickly. I’d argue the only shotgun that comes close trigger-wise is the infamous Mossberg 500, but paired with the Benelli’s superior accuracy, it definitely still has the edge. If you can shoot fast at close-range with a semi-auto shotgun, you’re likely to do damage, and half of that is having a quality trigger. The M4 meets that criteria and beyond.

Reloading the Benelli is, well, as easy as a shotgun reload can be. Using the traditional underside loading mechanism, it can relatively quickly load its five shells. This however brings up the only negative I have in relation to the Benelli M4—its low round capacity. Despite being a shotgun that originated through military contract, it’s longest barrel tube variants still can only hold five shells, three less than its counterparts like the Mossberg 500 or Remington 870 (which can be given longer tubes to hold up to eight rounds). This obviously means less stored ammo, which can be somewhat detrimental considering how easy it is to empty the M4 in such a short period of time. This is offset by the ease of reloading the M4, but is still an issue to keep in mind when you buy, train, or use this shotgun.

With stock retracted (35 inches) and stock extended (40 inches), the M4 is incredibly compact for a shotgun without being a sawed-off shotgun. The retractable stock on military variants (and for those with proper permits and licenses for civilians) allows this to become even more useful in CQB, as the extra five inches being able to be taken off of its length provides greater maneuverability to the user when going room-to-room or even in dense terrain.

The most shocking feature of the M4 is it’s astounding 8.42 pound weight. This comes in several pounds lighter than the M4A1 Carbine, itself an extremely light weapon. This means the Benelli M4 is exceptional for carrying long-term, and this lighter weight allows for you to carry in slung on your back in exchange for a rifle (like an AK or AR) depending on the situation you find yourself in. How can you go wrong with that?

As previously mentioned, for a semi-auto shotgun the Benelli M4 is unbelievably accurate due to its relatively low recoil. Gas-operated firearms like the Benelli are popular for their lower recoil due to energy not being concentrated on one particular part of the firearm (like inertia guns). Not only does this low recoil allow you to retrain your sights on target much quicker, it also allows lethal accuracy at close-range; a feature that a shotgun MUST have.

The biggest downfall of the Benelli M4 is undoubtedly its price tag of $1,900 to $2,300 (depending on your specs). It’s a quality weapon, and demands a quality weapon price. Which leads us to my conclusion on this firearm.

Despite its price, the Benelli M4 in my experience is worth every single bit of it. It’s not often you’ll find a semi-auto shotgun that is not only rugged and reliable, but also accurate to a tee at close range. This shotgun is perfect for those who want an nearly indestructible weapon that will devastate in close-range combat, including home-defense. Its semi-auto function, exceptional accuracy, low recoil, and flexibility to any situation make it a worthwhile investment for anyone interested in a shotgun guaranteed to not fail.