The Beretta 1301 Shotgun Or Ruger's GP100? Which Is Best For Defending Your Family? 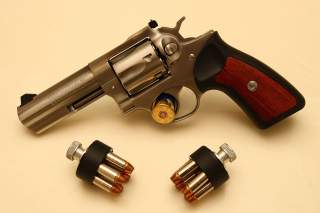 Key point: After calling the police, what weapon do you reach for to defend your family?

Home defense is probably the most stressful scenario a civilian gun owner could encounter. A crash or bump in the night, waking a homeowner up from an evening torpor or sound slumber, is a jarring proposition. Add to that a house or apartment full of family members for whom the homeowner is responsible, and things start moving very quickly. After calling the police, what weapon do you reach for to defend your family? Here are five options.

A semiautomatic shotgun from Italian gun manufacturer Beretta, the compact 1301 comes with an 18.5-inch barrel and a four-round magazine. The shotgun’s heft and weight, reminders of its raw power, are reassuring in stressful situations. The barrel length makes the shotgun easier to wield indoors without bumping into walls or getting caught in doorways. The semiautomatic loading system means that, after the first round, a second round is automatically loaded and ready to fire. Although shotgun shot is known to disperse with distance at close, indoor ranges, the dispersion pattern is negligible. Care should be taken firing indoors, however, as contrary to expectations shotgun shot is particularly good at penetrating drywall.

The Glock 19 handgun is slightly smaller than the original Glock 17, making it an excellent choice for home defense. The Glock 19 has a slightly shorter barrel than the -17, with a slightly smaller magazine capacity, but is less obtrusive and easier to conceal in a gun safe. As a handgun, the Glock is easier to maneuver through close indoor confines than a long gun. The recoil of a nine-millimeter pistol is very manageable and easier to keep the muzzle on target in stressful situations. A Glock 19 with a flashlight attachment and specialized self-defense rounds such as 147 grain Federal HST will quickly and reliably put down a threat.

Ruger’s GP-100 revolver is a beefy magnum pistol that brings some unique capabilities to the table. Like the Glock 19, it is easier to maneuver indoors. However, the GP100 is unique in having the adaptability to fire two calibers, .357 Magnum or .38 Special. .357 Magnum transfers more energy to the target, making it an excellent choice for those willing to deal with the greater recoil. Other shooters may prefer to use the softer shooting (but still dangerous) .38 Special round, which the GP100 handles with a minimum of recoil. The double-action nature of the GP100 means it is ready to fire, instantly, without racking a slide to chamber a round. The main downsides to the GP100 are a limitation to six rounds in the cylinder, and a lengthier and more involved reloading process.

The explosive popularity of the AR-15 platform over the last decade has resulted in several million such rifles residing in American households. While the 5.56-millimeter round’s high velocity and penetration against body armor means such a bullet could go through several walls in a home before stopping, properly configured an AR makes a reasonably good choice for home defense. An AR-15 with a sixteen-inch barrel, twenty- or thirty-round magazine, and flashlight attachment, coupled with 55 grain Nosler Ballistic Tip and Hornady V-Max ammunition can provide reassurance and protection while limiting overpenetration. The sound of the AR-15’s bolt slamming forward, chambering a round, will make for an intimidating sound in in a quiet, dark home.

New for 2018, Ruger’s PC (pistol caliber) carbine looks to be an excellent choice for home defense, combining the best attributes of a handgun and a long gun in a home-defense weapon. The nine-millimeter PC Carbine features a sixteen-inch cold hammer-forged barrel, fluted to reduce weight and threaded to accommodate muzzle brakes, compensators, flash hiders, or even a suppressor. The PC Carbine takes Ruger or Glock pistol magazines, has an overall length of just thirty-four inches, and has an adjustable length of pull to suit a wide range of body types. The length and weight of the PC Carbine will counteract much of the gun’s recoil, making for a stable shooting platform in a crisis situation. The Carbine’s ghost ring sights are adequate for the task, but a red dot sight and flashlight attached to the weapon would make for rapid target identification and target acquisition at night.