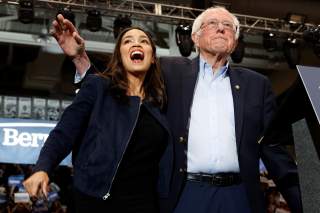 A new, more substantive policy break has occurred between Senator Bernie Sanders of Vermont, the current Democratic frontrunner for president, and Rep. Alexandria Ocasio-Cortez of New York, one of his primary campaign surrogates. This comes after previous stylistic disagreements on the campaign trail.

Sanders, a lifelong self-described democratic socialist, has made overhauling the U.S. health care system one of his primary issues. He has promised to introduce his legislation for Medicare for All within the first week of his presidency. This would expand the current Medicare system, which only covers Americans over the age of sixty-five, to include all U.S. citizens (and possibly non-citizen residents). This would be the equivalent of single-payer health care seen in other countries.

Ocasio-Cortez, a fellow socialist who volunteered on Sanders’ 2016 presidential campaign, says the immediate passage of Medicare for All isn’t a realistic goal. “A president can’t wave a magic wand and pass any legislation they want,” the freshman member of the House told Huffpost.

A majority of House Democrats currently support Medicare for All, but the idea still faces significant opposition from party leadership and members in competitive districts. The plan is opposed by every Republican in congress.

“The worst-case scenario? We compromise deeply and we end up getting a public option. Is that a nightmare? I don’t think so,” continued Ocasio-Cortez. A public option would create a state-run health insurance agency which would compete with already existing private insurance. This is different than state-funded health care, and unlike Sanders’ plan, would not criminalize the current insurance system.

“I love Rep. Alexandria Ocasio-Cortez. She has done more in her first year in Congress to transform politics, to get young people involved, than any freshman member of Congress that I can remember,” Sanders said, praising his youthful colleague during a CNN townhall. “But my view is that Medicare for All, the bill that we wrote, is in a sense already a compromise.”

Sanders previously fought for a public option as part of the Affordable Care Act in 2010, but that portion was dropped when it failed to receive the requisite support in congress.

The senator, who has spent a combined twenty-nine years in both houses of congress, has traditionally taken an optimistic view about passing his agenda. When asked in a previous Democratic debate which issue would receive most of his political capital, Sanders rejected the concept, saying there was no reason he couldn’t pass parts of his platform near-simultaneously. When asked how he would break bread with current Senate Majority Leader Mitch McConnell (R-KY), who would prevent any health care reform, Sanders replied that he would simply win back a Democratic majority.

American support for Medicare for All varies widely in the polls, depending on how the question is phrased.