Are Bernie Sanders and AOC Really on the Outs? 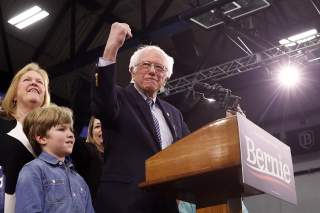 Fresh from his victory in the New Hampshire primary, press reports have divulged behind-the-scenes bickering between the Bernie Sanders campaign staff and their star spokeswoman, Rep. Alexandria Ocasio-Cortez.

The freshman congresswoman, who along with Rep. Rashida Tlaib of Michigan and Rep. Ilhan Omar of Minnesota, endorsed Sanders in October. Ocasio-Cortez previously door knocked as a volunteer for the Sanders in 2016. “This is not just about running for president. This is about creating a mass movement of working-class people…And when you talk to Bernie, he doesn’t talk about making a movement so that he can get elected. He talks about his campaign as part of a mass movement in America, and that’s the kind of leadership I think we need right now,” Ocasio-Cortez said in her official endorsement video.

In the last weekend of January, a week before the Iowa caucus, Ocasio-Cortez barnstormed the state, addressing ten events in three days. “Following Ocasio-Cortez’s three-day stint, Sanders’s campaign manager, Faiz Shakir, texted AOC’s campaign manager to express his dissatisfaction with aspects of her performance,” according to Abigail Tracy in Vanity Fair. “Specifically, the Sanders campaign was miffed that Ocasio-Cortez didn’t mention Sanders by name when she closed out a campaign event at the University of Iowa...”

This reminder was nothing more than a “good-natured ribbing,” assured the Sanders team.

There have also been rumors than Ocasio-Cortez and her staff was displeased by the Sanders campaign’s embrace of comedian and podcaster Joe Rogan. Rogan, who previously endorsed Rep. Tulsi Gabbard of Hawaii for president this cycle, mentioned on one of his shows that he would “probably vote for Bernie.” Sanders appeared on Rogan’s podcast, one of the most popular in the world, in August. The senator’s campaign then packaged the Rogan clip into an official video and used it as an unofficial “endorsement.”

The Sanders campaign denied that Ocasio-Cortez or her staff raised any concerns about the Rogan endorsement.

The final consideration was how the congresswoman was phrasing her immigration stance. “I’m not here to reform some of these systems when we talk about immigration. I’m here because Senator Sanders has actually committed to breaking up ICE [U.S. Immigration and Custom Enforcement] and CBP [U.S. Customs and Border Protection]. That’s why I’m here,” Ocasio-Cortez said at one Iowa event.

Sanders, who has softened his language on immigration in recent years, has said he would eliminate the two federal agencies and reassign their duties to the other parts of the federal government. The senator has been clear in his emphasis that he does not support “open borders.”

While there are claims that Ocasio-Cortez went off-script with her emphasis and choice of language, the Sanders campaign denied having any foibles about her statements.

The superficial concerns behind the curtain do not appear to have affected the relationship between the progressive champions. “I have been in Congress for a few years, and I honestly cannot recall any single first-term member of Congress having as much impact on our country as Alexandria has,” Sanders said in Iowa.