Bernie's Fatal Mistake: Most Americans Don't Want Medicare For All 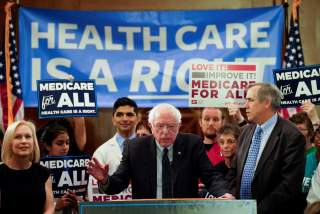 Democrats are debating among themselves how to massively expand government coverage to all Americans, apparently unaware that a majority of Americans like their current private health care.

According to the latest Gallup polling data on health care, 52% of Americans rate the quality of health care overall in America as “excellent” or “good.”

When just over half of Americans rate the overall system favorably, drastic changes to the system, such as Sen. Bernie Sanders’ “Medicare for All” plan, seem rash. It seems even more rash, even reckless, given how people feel about their own health care.

Considering that, according to the Organization for Economic Cooperation and Development, more than 60% of Americans are covered by private health insurance, Americans seem fairly satisfied with the quality and coverage that markets are able to deliver to them.

Perhaps even more surprising, however, is that 61% of respondents reported being satisfied with the total cost of their health care. Again, this suggests that market dynamics are delivering on health care value and cost to a majority of Americans. That’s despite health care being one of the most heavily regulated industries in the United States.

Fortunately, a majority, albeit a slim one, recognize that fact, and 54% reported that they prefer a health system based mostly on private health insurance, as opposed to one run by the government.

The strongly negative opinions given in this Gallup data are about costs (73% dissatisfied) and coverage (66% fair or poor) of the system as a whole, as opposed to individuals’ personal experiences. Simply put, American health care is working, and working well, for most Americans.

None of this is to say that the status quo is acceptable, but the gamut of options offered by the Democratic Party run from bad to worse.

The most developed plan is Medicare for All, which has legislative text and has been introduced in both the House and the Senate. Medicare for All would completely demolish the current health care system and replace it with an all-encompassing federal program that would pay for all health expenses for all Americans.

That sounds good, except that it would also make illegal the health care plansof those 79% of Americans satisfied with their current coverage.

Furthermore, where a majority of Americans are satisfied with the cost of their current health care plan, a greater majority would be financially worse off under Medicare for All.

Ostensibly, Medicare for All is meant to free Americans from the burden of medical costs. But according to a Heritage Foundation study, paying for the extremely generous benefits package of Medicare for All would place a tremendous tax burden on American households, resulting in $10,554 less disposable income on average.

That occurs in large part because Medicare for All would eliminate popular employer-based insurance plans and expose a greater portion of wages and salaries to new taxes to pay for the program.

The end result of that is that 73.5%—nearly three-quarters—of Americans actually would be financially worse off, not better, under the program than under the current system.

In contrast to Medicare for All, a more “moderate” plan is one proposed by former South Bend, Indiana, Mayor Pete Buttigieg, called “Medicare for All Who Want It.” The plan is what is known as the “public option,” which makes government-sponsored plans available to the general public, whereas the current Medicare and Medicaid programs have eligibility requirements.

According to Buttigieg, who since has dropped out of the race for the Democratic presidential nomination, his plan theoretically would provide market competition to private insurers to drive down prices and increase quality.

The obvious problem boils down to a basic economic principle: It is impossible to compete fairly against the one who writes the rules.

It’s not a mere abstraction, but an observed fact, that private insurers have to pay more to subsidize losses that hospitals take on treating Medicare or Medicaid patients. An editorial in the Journal of the American Medical Association noted that on average, a private insurer pays 144.8% of costs, compared with the 88.1% of costs that Medicare would pay.

How can private insurance companies compete against the government if they are regularly forced to subsidize their competitor?

As it turns out, this is a feature, not a bug, of Buttigieg’s plan. Per his website, “this public plan will create a natural glide-path to Medicare for All.”

There’s much need for reform in American health care to empower patient decision-making and to increase flexibility in insurance plans, but with Democrats, whether radical or “moderate,” if you like your plan, you cannot keep it.