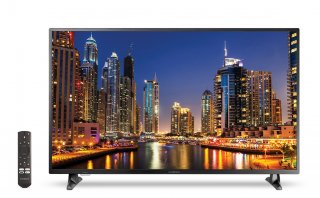 Insignia, as Best Buy’s TV brand, is sort of like the Frankenstein of the TV world.

As the brand often uses parts from past-year versions of LG, Toshiba and Samsung TVs, sometimes you don’t exactly know what you’re getting, but as always, they do appeal to the budget-conscious consumer.

At its brick-and-mortar stores, Best Buy has long been known for selling great products at reasonable prices, and their employees are usually incredibly knowledgeable about their products. That makes the shopping experience that much more beneficial, and that kind of feeling is reflected in the Insignia brand. Best Buy is telling you exactly what you need for your TV, and for the price you’re paying, it’s really not a bad deal.

With most of the offerings in the $150 to $400 range, you will likely have some leeway on your high demands for a new TV. The Insignia 4K Fire TV Edition is a great place to start for younger consumers who want to check out Best Buy’s offerings. It really is a solid smart TV, and while the picture quality won’t necessarily blow you away, it is more than passable for everyday TV watching.

At $300 to $400, the price tag is more than reasonable and can compete well with similar offerings from TCL and Hisense. What really jumps out at you is the tie-up that Best Buy is forging with Amazon, whereas in the past it was with Roku. Insignia, by itself, really won’t make waves in the TV market, but now with Amazon (and Alexa) under its panels, it is really seeking to find its niche.

There is a mic built into the remote control, and with Alexa handling all communication between you and the TV, it’s like having an Echo without actually paying for one. And it is fully capable of giving you access to your favorite apps like Netflix, Hulu and HBO, as well as obviously Amazon Prime Video.

Along with the 4K display, it boasts a 60-Hz refresh rate and limited HDR capability. But even when watching action-heavy Marvel films, the screen action was fairly smooth and the color spectrum was on full display. As a bargain bin find, people will definitely be surprised at what they’ll get with this TV.

The TV is indeed inexpensive, so much can’t be expected from Insignia’s audio either, though it could possibly work in smaller bedrooms. The speakers are pretty lackluster and any audiophile would want to purchase a decent soundbar for a more cinema-like experience. Hey, you’ll be saving money on the TV itself, so maybe you can splurge a bit more in the sound department.