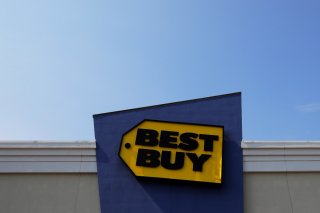 This week, Best Buy posted an 8 percent decline in first-quarter, same-store sales from the same time last year. But, per CNBC, the company’s decline was actually less than the 8.6 percent that analysts had predicted.

In terms of revenue, the company posted $10.6 billion in the first quarter, compared to $11.6 billion this time last year. However, analysts had predicted only $10.41 billion in revenue. Other big-box giants like Target and Walmart had reported sales growth last week that was below Wall Street expectations, CNBC said.

Best Buy warned back in March that financial results would be “softer.” Last November, the company’s CEO had also said that what is seen as a recent increase in in-store thefts has served to “traumatize” store employees. “Even with the expected slowdown this year, we continue to be in a fundamentally stronger position than we were before the pandemic from both a revenue and operating income rate perspective,” CEO Corie Barry said in the earnings release.

“We are confident in the strength of our business and excited about what lies ahead. We have a unique value creation opportunity and are investing now, as we have successfully invested ahead of change in our past, to ensure we’re ready to meet the needs of our customers and employees and retain our unique position in our industry,” the earnings release stated.

“The drivers of our Q1 financial results were largely as expected,” Barry added in the earnings release. “Macro conditions worsened since we provided our guidance in early March which resulted in our sales being slightly lower than our expectations. Those trends have continued into Q2 and, as a result, we are revising our sales and profitability expectations for the year,” it continued.

On a subsequent earnings call, Barry talked more about the challenging environment. ″Consumer electronics over time is a stable industry,” Barry said on the call, as reported by CNBC. “The last two years have clearly underscored the importance of tech in people’s lives, so I think it’s important for us to have that as a backdrop.”

Earlier this month, Best Buy announced that it was expanding into some new, nontraditional product categories, including patio furniture, e-bikes, and even beauty gadgets, from such brands in the category as Foreo, Vanity Planet, and PMD Beauty. One of the suppliers of outdoor furniture is Yardbird, a company that Best Buy acquired last November. Yardbird has been described as the “Warby Parker of garden furniture.”