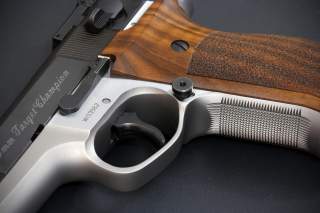 The Smith & Wesson Model 29 was one of the first revolvers chambered for the powerful .44 Magnum round. A blued, six cylinder revolver with wooden grips and a classic style, the Model 29 became particularly popular after its use in the “Dirty Harry” series of films. The Model 29 is an all-steel handgun with heft, all the better to soak up the punishing level of recoil a user experiences when fired. ​