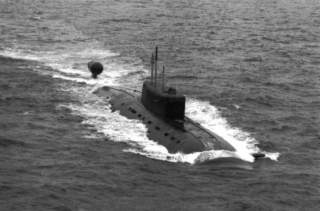 These submarines promised to be more capable, longer legged, and more lethal than the second-generation Victors, Charlies, and Alfas that populated the Soviet undersea fleet entering the 1980s. Faster and deeper diving than the Victors and Charlies, with greater endurance and more—and better—weapons than the Alfas, the Sierra had the makings of the ultimate Soviet attack boat. Yet, today, they’re only remembered by those interested in Soviet attack submarines.

There are several reasons for the Sierra fading into obscurity, whereas the Akulas are well known and frequently in the news. The first is they were phenomenally hard to build. The fully titanium hull was labor and cost intensive, even more so than that of the high-performance Alfas. This massive cost meant that only four examples were ever built, two each of the Sierra I and II classes. By comparison, fifteen of the steel hulled Akulas were built. The second is that for all their exceptional ability, the Akulas did the same job for significantly cheaper. The third and final primary reason was the economic malaise and impending collapse of the Soviet Union.

When first being designed in the late 1970s, the Sierras were a drastic departure from previous Soviet attack boats. Critically, they were designed with only a single reactor, a design feature only previously done on the Charlie-class cruise missile submarines. However, where the Charlies were dramatically slower than the rest of the Soviet undersea fleet, the Sierra packed just one of the Typhoon-class’ massive OK-650a reactors, generating a whopping 50,000 shaft horsepower.

This reactor plant, coupled with a high-efficiency screw, gave the Sierra a world-beating estimated underwater speed of thirty-five knots. Faster than both the Los Angeles-class American subs that would hunt them, and their more conventional Akula-class cousins, the Sierra were only slower than the tiny Alfas and the world-record holding Papa. When every knot available can mean the difference between life-and-death, the Sierra may have been one of the most lethal underwater hunters ever put to sea.

Titanium provided the necessary performance to get these hunters faster than anything they might have come across in the world’s oceans. Like the much smaller Alfa, the Sierra had an entirely titanium hull, being both incredibly light for the size, and incredibly strong. Despite being only ten feet shorter than the steel-hulled Akulas, the Sierras were a whopping two thousand tons, or some four million pounds, lighter. They also had an unrivaled diving depth of almost two thousand feet, where the competing Los Angeles-class boats are publicly stated to be restricted to above a thousand.

The Sierra was also not lacking for firepower. The initial Sierra I (known to the Soviets as the Project 945 Barracuda), packed two 650mm (25 in), and four 533mm (21 in) tubes, with space for forty torpedoes, anti-submarine missiles, or mines. The successor Sierra II (Project 945A Kondor) doubled its 650mm tubes to four of each size. Both types had a fully-automatic, unmanned reloading system—similar in theory to those found on Soviet tanks like the T-72 and T-80.

Speaking of weapons, they were able to fire the full suite of weapons available to Soviet submarines at the end of the Cold War. This included the carrier killing 65-76, which utilized wake-homing guidance to be un-decoyable. The 1000lb warhead of this torpedo could theoretically cripple an American supercarrier in a single hit. Also available was the SS-N-15/16 anti-submarine missile. This weapon, very similar to the American UUM-44 SUBROC, would carry a torpedo or nuclear depth charge to the surface, then ignite a rocket motor to fly the weapon to where the Soviet submarine believed the enemy submarine to be. While the SUBROC only carried a nuclear warhead, the SS-N-15/16 was the more versatile, not to mention the longer-ranged, weapon.

Sonar was possibly the only real weakness of the Sierra, and something American attack boat skippers would have to have used to the maximum to get the advantage in a high seas duel. The Soviet boats still used the MGK-500 Shark Gill sonar suite that equipped the older Victor IIIs. This included a large towed array, housed in a pod the size of a Volkswagen minibus on the top of the rudder. The Shark Gill, while state of the art in Russia, was still some years behind the AN/BQQ-5 system in the LA boats.

The Sierra II subclass, Project 945A in Russian terms, was slightly larger than the baseline Project 945s. This allowed for increased quieting, several more stored weapons, and an escape pod in the sail that could accommodate the entire crew. Both Sierra IIs remain in service, while the Sierra Is undergo modernization.

The Sierras were possibly the best all-around attack submarines the Soviets built during the Cold War. Fast, lethal, and made of titanium, they were everything an attack submarine should be. However, they were also overly expensive, difficult to build, and didn’t do enough things better than the steel-hulled Akulas to justify the cost. The Sierra spent several years concerning western intelligence types, before the collapse of the Soviet Union saw them tied up at their pier for good. However, that may not be the end of their story, as several are undergoing refit and modernization, and have been in active service in recent years.

Robert Jensen is a part-time historian and analyst, and is a regular commenter on global naval issues, technologies, and history. He studied Global Security and Intelligence Studies at Embry-Riddle Aeronautical University.