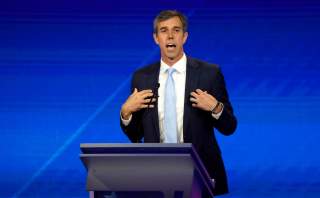 O’Rourke struggled to maintain 2% of the vote in a Wall Street Journal poll conducted Sept. 13-16 of 506 Democratic primary voters. His numbers didn’t change much since July, when the former lawmakers pulled in only 1% support.

The numbers come after the Sept. 12 Democratic debate in which O’Rourke assured viewers that he would indeed make a play for semi-automatic rifles. “Hell yes we are going to take your AR-15, your AK-47,” he said to applause from those who attended the debate in Houston.

O’Rourke began promoting the position in early September after another mass shooting in Texas left several dead in El Paso.

“I see us working with gun owners, non-gun owners, local, county, state, federal law enforcement to come up with the best possible solution. I have yet to meet an owner of an AR-15 who thinks it’s OK that we have these kind of mass killings in this country,” the 46-year-old told reporters in a Sept. 9 interview.

Tuesday’s poll also showed a bump for former Vice President Joe Biden, who is running neck and neck with Sens. Elizabeth Warren of Massachusetts and Bernie Sanders of Vermont. Biden leads the horserace with backing from 31% of Democratic primary voters, while Warren gets 25 percent.

They’re followed by Sanders at 14 percent, South Bend Mayor Pete Buttigieg is at 7 percent and Sen. Kamala Harris of California at 5 percent (down 8 points). Businessman Andrew Yang pulled in support from 4% of primary voters, while Sens. Amy Klobuchar and Cory Booker get 2 percent, respectively.