Better Than a Glock 19? Check out These 5 Deadly Guns 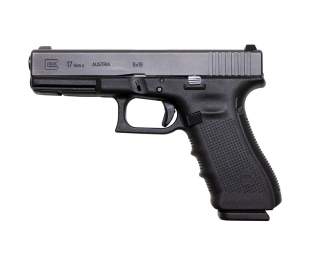 Originally developed by the Croatian arms manufacturer HS Produkt and brought to the United States as the HS-2000, Springfield Armory took over distribution and rebranded the pistol the Springfield XD. The XD, “Extreme Duty,” is very similar to the Glock 19 in some ways: a polymer frame, metal slide, striker fired pistol. The barrel length and overall length are identical.

Among Glock’s large and varied lineup, one pistol is held up more than any other as the “ideal” Glock and to some, the idea pistol period: the Glock 19. Compact, reliable and with a large magazine capacity, it is the standard by which other high capacity autoloaders are judged. In response to the Glock 19’s reliability, the market has produced several competitors. How do these stack up to the king of the polymer guns?

The second Glock to enter production, the Glock 19 is a compact version of the original, full-sized Glock 17 developed for the Austrian Army. The Glock 19 is almost an inch shorter than the Glock 17 and half an inch shorter in height. It is the exact same pistol in terms of operation, and weighs two ounces less due to a slightly smaller magazine (fifteen rounds versus seventeen rounds.) The Glock’s competitors, on the other hand, vary slightly in operating systems, materials, and other features.

Originally developed by the Croatian arms manufacturer HS Produkt and brought to the United States as the HS-2000, Springfield Armory took over distribution and rebranded the pistol the Springfield XD. The XD, “Extreme Duty,” is very similar to the Glock 19 in some ways: a polymer frame, metal slide, striker fired pistol. The barrel length and overall length are identical.

The XD differs in several ways. It features a more vertical grip than the Glock, more in line with 1911 pistols. It features a loaded chamber indicator, a larger and more pronounced takedown lever, and a grip safety. The latter prevents the pistol from being discharged unless gripped in the palm of the hand. The XD also squeezes in an extra round, bringing its internal magazine count to sixteen rounds.

An evolution of the legendary Sig 210, the Sig P229 is a compact version of the P226, developed in the late seventies as a contender to replace the 1911A1 as the official pistol of the U.S. Armed Forces. Although the P226 lost, it achieved prominence with the U.S. Navy SEALS, whose high round counts unfortunately coincided with early flawed slides in the winning pistol, the Beretta 92. After a handful of injuries, the P226 was adopted by the SEALSs as the Mark 25 pistol. Riding on the popularity of the P226, Sig Sauer created a compact version, the P229.

Like many compact handguns, the P229 is simply a dimensionally smaller version of the full-size P226. The P229 is a traditional hammer-fired pistol with a double action/single action trigger, meaning the first pull of the trigger has an approximately ten-pound pull, with subsequent shots having a four-pound pull. A decocking lever will safely lower the hammer without discharging the pistol.

Smith & Wesson is one of the oldest names in American firearms. Established in 1852, Smith & Wesson was known for decades primarily as the manufacturer of quality revolvers. Although the company produced several types of semi-automatics in the postwar era, it was slow to respond to a tidal wave of European “Wonder Nines”—high-capacity, nine-millimeter pistols—that hit the American market starting in the 1980s.

The 1911 series of pistols, invented by legendary arms designer John Moses Browning, have been in continuous production for more than one hundred years. The patent for the original 1911 design ran out a long time ago, and most of today’s gun manufacturers produce their own version of the 1911A1. The Dan Wesson Guardian is a variation on the Colt Commander, a slightly smaller and more compact version of what is now termed a “full-size” 1911A1.

The Dan Wesson Guardian is on the larger side of the compact pistol spectrum. Eight inches long, it features a 4.25-inch barrel. It features an aluminum slide and steel frame, and as a result still weighs a competitive 28.5 ounces. A single column magazine pistol, the Guardian holds just nine nine-millimeter rounds. A 1911 at heart, it has a grip safety and manual safety, making the Guardian and guns like it favorites of those who like to carry “cocked and locked”: loaded chamber, hammer back, and safety on.

Our last pistol that can take on the Glock 19 is...another Glock. The Glock 48 is essentially a Glock 19 with a single column magazine. The two pistols are virtually identical in length and height, but the Glock 48’s narrower magazine translates into a narrower pistol, shaving .16 inches off the width of the Glock 19. While this doesn’t sound like much, it can make the difference between staying concealed and “printing” an outline of the handgun against the carrier’s clothing. The Glock 48’s major trade-off is a smaller magazine capacity, holding just ten rounds of nine-millimeter ammunition.