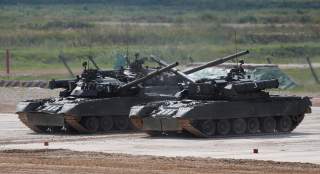 On August 26, 2008, Moscow officially recognized South Ossetia and Abkhazia as independent states. The two regions hadn’t broken away from Georgia on their own, of course—Russia had invaded Georgia just weeks before and occupied both regions.

In “recognizing” the independence of South Ossetia and Abkhazia, the Kremlin hoped others would follow its lead, thereby helping to legitimize its military aggression. Ten years later, that hope remains mostly unfulfilled.

Today, only four countries—Syria, Nicaragua, Venezuela, and Nauru—align with Russia in recognizing the independence of the two regions. Syria’s support arrived just this year, after intense pressure from Russia. The other three nations came aboard earlier, but only after Russia offered significant economic incentives. The price for Nauru’s support was $51 million in humanitarian aid. Venezuela held out for a $2.2 billion loan to purchase Russian arms.

Despite the lack of international approbation, Russian troops continue to occupy the two Georgian regions, and Moscow still frequently violates the ceasefire agreement formed back in 2008.

The history of the region is complex. When the Soviet Union collapsed in 1991, Georgia declared its independence. Yet the separatist desires of some in Abkhazia and South Ossetia left Georgia struggling to exert its sovereignty in those regions. Nonetheless, the international community—including Russia, up until its 2008 invasion—has consistently recognized those territories as being part of Georgia.

In the 1990s, fighting between Georgian troops and the separatists of South Ossetia and Abkhazia eventually brought ceasefire agreements. One result was that Russian peacekeeping forces were deployed to both regions.

Still, the situation in the two regions remained tense. It finally boiled over on August 7, 2008. While the world was fixated on the Beijing Summer Olympics, Russia invaded Georgia.

Moscow paired a sophisticated cyber-attack that weakened Georgia’s internal systems, with a conventional invasion force of thousands of troops and hundreds of armored vehicle and tanks. Russian troops even advanced within mere miles of the capital Tbilisi and bombed the civilian airport there.

Despite the war lasting only five days, the loss was tremendous. Hundreds were killed, and many villages in South Ossetia and Abkhazia were destroyed. Russian troops also looted ethnic Georgians’ homes and set them aflame.

On August 12, 2008, Russia finally agreed to a six-point ceasefire brokered by a European Union delegation led by then-French president Nicolas Sarkozy. However, even a decade after signing the agreement, Russia is still in violation of its terms.

For instance, two weeks after agreeing to the ceasefire, Russia went even further—it recognized South Ossetia and Abkhazia as independent states.

The effects of the war are still felt today. Hundreds of thousands of ethnic Georgians remain displaced from their homes. Families remain separated because of Russia’s “borderization” policy for the two regions.

Russia continues to violate the ceasefire and pursues a policy of “creeping annexation.” For instance, since 2008, on at least fifty-six occasions, Russia has brought additional Georgian territory under occupation, according to research by The Heritage Foundation.

In places like Afghanistan and Iraq, Georgia has been a strong ally for the United States. It also works closely with the North Atlantic Treaty Organization. To help this reliable friend defend its airspace and borders, America last year provided Tbilisi with the Javelin anti-tank missiles and Stinger air-defense systems. Washington should supplement this military assistance with additional weaponry for Georgia.

The United States also should encourage the four nations siding with Russia to withdraw their recognition of South Ossetia and Abkhazia as independent and realign their policy with that of the international community.

If Russia’s “creeping annexation” of Georgia continues, America could consider responding with an intense round of economic sanctions. These sanctions could target top Russian officials linked to the Russian occupation in Georgia, and could easily be matched by the United States’ European allies.

Moscow should realize its aggressive actions toward its former client states will not be tolerated. Should this kind of misconduct continue, the consequences could prove to be extremely costly for Russia.

Alexis Mrachek researches Russian and Eurasian issues in the Allison Center for Foreign Policy Studies at The Heritage Foundation (heritage.org).