Biden’s Resurrection from the Dead Was Insanely Unprecedented 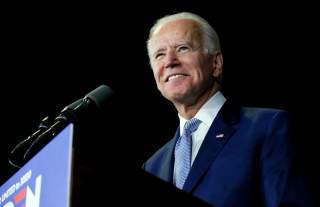 The dominant question going into Super Tuesday was: Did Joe Biden’s sweeping victory in South Carolina come just in time, or was it too late?

A week ago, prognosticators speculated that Bernie Sanders could emerge from Super Tuesday’s contests with an insurmountable delegate lead of more than 300 delegates. After that, since Democrats allocate delegates proportionally, they said even if a Sanders challenger won a state 55% to 45%, Sanders’ delegate lead would narrow only marginally.

Instead, Biden’s powerful showing on Super Tuesday saw him easily break the “threshold” level – the 15% of votes cast required to collect delegates – virtually everywhere. He carried Elizabeth Warren’s home state of Massachusetts, outperformed projections in Sanders’ own Vermont and won Minnesota against all expectations. Biden prevailed in the southern states, including the mega-prize of Texas.

While Sanders will come in first in California, Biden will have a massive haul of delegates, especially as mail-in ballots trickle in post-Super Tuesday.

In fact, at this point, it’s Biden, not Sanders, who leads in delegates.

Michael Bloomberg has dropped out and endorsed Biden. His money is limitless, but his rationale for getting in – preventing a Sanders nomination as Biden faltered – collapsed.

Bloomberg will now become Biden’s wing-man, potentially committing his vast resources and deep organization to the Biden cause.

Warren, after her poor showing and her humiliating loss in Massachusetts, is “reassessing.” Her only rationale for continuing – that she can bring the Sanders and the non-Sanders coalitions together – hardly seems plausible. It would mean the Democratic Party nominating someone who consistently finishes third or worse in most primaries.

As ballots were cast on Super Tuesday, Nate Silver of fivethirtyeight.com estimated that Joe Biden would enter the convention with over 1,700 delegates, while Bernie Sanders would claim over 1,300.

To win outright, a candidate needs 1,991 delegates. The Bloomberg, Buttigieg and Klobuchar delegates seem mostly destined to move to Biden. Hundreds of superdelegates are also available to vote for the former vice president on a second ballot if the convention needs it. All that makes Biden now the prohibitive favorite to be the nominee. His resurrection was swift, almost unbelievable and simply unprecedented in the modern history of Democratic presidential primaries.