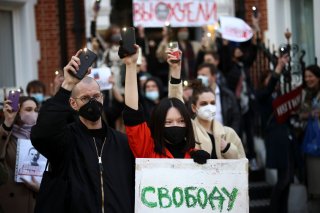 Three months into its term in office, the Biden administration seems to be getting serious about Russia. Last week, President Joe Biden issued a sweeping new set of sanctions against Russian entities in response to, among other things, interference in the 2020 election and massive hacks of U.S. government entities. Simultaneously, Biden has urged his Russian counterpart, Vladimir Putin, to hold a summit and launch what may become a dialogue on “strategic stability” between the two countries.

If that meeting does take place later this year as hoped, then it’s sure to span a whole range of troublesome issues, from arms control to Russia’s growing military adventurism against Ukraine. Yet there is another that should also rank high on the Administration’s agenda: the human rights situation in the country.

Such an emphasis would bring many benefits. It would allow the United States to claim a moral high ground in dealings with Moscow—a position that has eroded in recent years as a result of a more laissez faire attitude in Washington toward domestic conditions within the country. It would also better align U.S. policy with that of NATO, which has struggled of late to strike the right balance in deterring the Kremlin while simultaneously nurturing its political evolution. Most of all, however, such a shift in policy is warranted because of the changes taking place within Russia.

Those changes have everything to do with the plight of opposition leader Alexei Navalny. Navalny has been a household name in Russia for years, thanks to the work of his Anti-Corruption Foundation, which has called out the Kremlin for its past crooked dealings and misappropriation of funds. But he became an international cause celebre last fall when he was the victim of a suspected poisoning attack by Kremlin operatives. That diagnosis was confirmed by doctors in Germany, where Navalny was evacuated for treatment.

Navalny’s story doesn’t end there, however. Earlier this year, Navalny returned to Russia, only to immediately be arrested by Russian authorities because he had missed a court hearing before the very same government that tried to have him killed. He was subsequently sentenced to two-and-a-half years in prison.

Western governments, and even Navalny, have disputed the validity of these charges and are demanding his release. While in custody, Navalny and his team have been tapping into their network of supporters, encouraging them to protest on the streets of Moscow, St. Petersburg, and other Russian locales. The result has been the largest outpouring of popular opposition in recent memory, and thousands have been detained by Russian police. The U.S. State Department condemned the tactics of the Russian security apparatus on protestors on Jan. 23. The department called the entire situation “troubling indications of further restrictions on civil society and fundamental freedoms.”

That ferment reflects steadily worsening conditions for individual freedoms and civil liberties within the Russian Federation. To be sure, Russia has never been a global beacon for human rights. Even so, recent years have seen a widening array of debilitating restrictions on freedom of speech, blatant election manipulation, growing censorship and mounting barriers to peaceful assembly, as groups like Human Rights Watch have documented.

As it begins formulating its approach to Russia in earnest, the Biden administration has an opening to leverage these factors. Through both carrots (such as Russia’s provisional reintegration into the G8) and sticks, including an expansion of so-called “Magnitsky” sanctions against individuals connected to internal repression, Biden can inject a new coherence into U.S. policy, which—at least when it comes to Russia—has become overwhelmingly negative in recent years. Just as importantly, the United States can use human rights to better shape Moscow’s behavior, both internationally and at home.

There is certainly a historical precedent for this type of policy. During the decades of the Cold War, successive U.S. administrations used human-rights pressure (on issues such as Jewish emigration) as a way of influencing Soviet conduct, to great effect. In light of Russia’s current internal situation, it is reasonable to conclude that the same sort of pressure can pay dividends today as well.

The bottom line is clear: Biden needs a new Russia policy. A new approach involving a greater focus on human rights in Russia would be a courageous undertaking—one that would allow Washington to move beyond the stale policies of its predecessors to better focus on challenging Moscow. That is something for Biden to consider, as he draws closer to dialogue with his Russian counterpart.

Matthew Cesare is a researcher at the American Foreign Policy Council in Washington, DC.