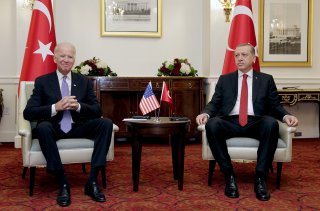 Joe Biden’s presidency is largely depicted as a doomsday scenario for the Turkish-American relations, where, unlike Donald Trump, Biden is expected to pursue constricting policies on Turkey. He criticized Trump for “abandoning” the Syrian Kurds and urged him to prevent Turkey’s “attacks” on them. He has also issued a statement condemning Turkey’s “provocative actions against Greece” and urged Turkey “to stay out of the conflict between Armenia and Azerbaijan in Nagorno-Karabakh.” Furthermore, many are of the opinion that Biden is poised to impose the Countering America’s Adversaries Through Sanctions Act (CAATSA) on Turkey for purchasing the Russian S-400 missiles. In a surfaced video, Biden pledges his support for Turkey’s opposition in their quest to replace the Turkish president Recep Tayyip Erdogan. In a way, Biden’s rhetoric gives the impression that after January 2021, Washington is going to impose choking measures that will “discipline the rogue ally.”

However, there are considerable signs that the ever waning power of America coupled with Turkey’s rise to prominence in its region (by pursuing a resolute foreign policy) will dissuade the Biden administration from being aggressive towards Turkey.

Washington’s relentless pursuit of creating a sovereign Kurdish entity in Turkey’s southern doorstep in the name of countering Iran and preventing the resurrection of ISIS constitutes a severe threat to Turkey’s national security as Ankara sees no difference between the Syrian People’s Protection Units (YPG) and the Kurdistan Workers Party, which both Turkey and the United States recognize as a terrorist organization. Ankara has shown its resoluteness in preventing the YPG self-governance in Syria by staging three major military incursions in the last four years. Having proven that it is capable of scoring significant strategic gains away from home, in Libya, in Nagorno-Karabakh, and in Qatar, Turkey has considerable deterrence against the formation of an entity that it deems hostile, a few miles away from its southern border. Considering Turkey has amassed more than 20,000 troops and heavy equipment along its Syria border, a symbolic 200+ American troop presence in Syria is not going to be enough to stop Turkey’s massive operation in case of declaration of official YPG independence. And, most definitely, the clash with a NATO member over a stillborn project is the last thing Washington would want. Finally, it is highly likely that Biden’s rhetoric as a candidate, regarding Syria, will be different when in office. In August 2016, when he was the vice president, Biden threatened the YPG that “the U.S. will cut all support for the Syrian Kurds if they do not comply with Turkish demands,” which was that the YPG withdraw to the east of the Euphrates River.

Turkey’s urgent need for a comprehensive high-altitude air defense system due to the ever-growing instability in the Middle East in the last decade, and Washington’s unwillingness to meet this requirement are the root factors for the S-400 debacle we are in today. Turkey rushed to acquire a stand-alone missile defense system when in August 2015 the United States and Germany decided to abruptly pull the U.S.-made PATRIOT PAC-3 missile system under NATO from Turkey’s southern border at a time when the Syrian Civil war entered into an explosive stage, and Iran became more assertive. This was threatening to Turkey’s national security. Both France (SAMP/T) and the United States (PATRIOT PAC-3) refused to sell their products after Turkey made the technology transfer a priority for developing its own indigenous missile defense system. Then came the Obama administration’s ominous decision to arm and train the YPG, which, for Turkey, was the straw that broke the camel’s back. Having seen Ankara’s growing abandonment by Washington in Syria, Russian president Vladimir Putin did not lose any time in offering to help, also hoping as well that it would weaken NATO. It was the overt Russian support that facilitated Turkey’s removal of the YPG from Afrin. The need for a reliable partner in Syria and Putin’s attractive offer on the S-400 missiles only propelled Turkey into the Russian orbit. Thus came about Turkey’s S-400 purchase, which infuriated Washington and led to Turkey’s expulsion from the F-35 program.

By the CAATSA law of 2017, an American president is required to impose sanctions on those states that engage in business with Russia, Iran, and North Korea. For Turkey, CAATSA includes a range of options: from denials of visas of Turkish officials, and the prohibition of export licenses, to harsher measures such as the blocking of any transactions with the U.S. financial system. Yet, the law also grants the president national security waivers by which he can hold off sanctions, which Trump has done so far.

All this comes down to whether the Biden administration will conclude whether the benefit of holding sanctions off against Turkey or simply use them minimally, outweighs imposing them in the manner that will cripple Turkey. There are considerable disincentives in resorting to the last option. The current Erdogan Government has made it very clear that it could seriously hurt American interests in the Middle East if CAATSA is enacted. Turkey’s Minister of Foreign Affairs Mevlut Cavusoglu warned last year that requesting the United States to leave the strategically important Incirlik Air Base is among the options. (Leaving the Incirlik Base will severely cripple the United States’ ability to conduct operations in the Middle East, provide security to Israel, and contain both Iran and Russia.) Last month, Erdogan overtly defied Washington saying, “Whatever your sanctions are, don’t be late.”

Biden, who called Russia “the biggest threat to American national security,” has made it a foreign policy priority to contain Moscow. Strengthening NATO’s military capabilities, Biden emphasizes, what will constitute the greatest deterrence against Russia. And, he will have a hard time achieving this goal without Turkey, the alliance’s second most powerful military after the United States. There is the perception that Turkey has turned away from the alliance, however, the facts show it has actively supported NATO missions in Kosovo, Afghanistan, Iraq and unlike France and Greece, Turkey has never left the alliance in a lurch.

Biden’s Russian containment policy is rendered obsolete without controlling the Black Sea and the Turkish Straits. Turkey is currently the most important pillar of the NATO Maritime Groups’ (SNMG) activities in the Black Sea, where the Russian and NATO aircrafts frequently conduct intercepts.

Although Turkey felt compelled to purchase the Russian missile systems, at the same time, it is the only country that has taken steps that can get on Moscow’s nerves. Last year, Turkish drone specialist Baykar Makina and the Ukrainian company, Ukrspecexport signed an agreement involving development and production of “sensitive technologies in defense and aerospace.” Furthermore, Ukraine, which is effectively at war with Russia, is poised to purchase fifty Turkish-made Bayraktar TB2 UAVs, which have a proven record of destroying sophisticated Russian-made arms such as S-300, Pantsir C1, and TOR-M. Erdogan has criticized Russia for invading Crimea and urged Moscow to respect the rights of the Turkic minority there. Moreover, Ankara has voiced its full support for the admission of Georgia, another country Russia has invaded, into NATO, a move that would infuriate Putin.

What is Ahead for Turkish-American Relations?

The endless wars in the last three decades, the 2008 financial crisis, China’s rise, and the current pandemic have all drained America’s capability to project power around the globe. The Middle East is no exception. Being a shadow of itself in the 1990s where it was able to deploy more than 100,000 troops, Washington has now been reduced to feeling compelled to use a very controversial proxy (the YPG), which Turkey, an indispensable NATO ally, considers a top national security threat. Policymakers in Washington have been making a serious mistake by constantly threatening Ankara with punitive measures just because Ankara seeks assurances elsewhere due to Washington’s apathy to Turkey’s security needs. And Turkey is much different today than it was in the 1990s when Washington’s intimidation worked. An increasingly independent and confident foreign policy and self-sufficiency in the defense industry has allowed Turkey to project power far beyond its borders.

Yes. Washington still is capable of “destroying and obliterating the Turkish economy,” but at what cost? Losing Iran in 1979 as a U.S. ally cost America dearly. Losing Turkey altogether is going to cost Washington its presence in Eurasia, where Russia and China have already become dominant. There is no other country in South West Asia valuable enough to replace Turkey as a U.S. ally. Therefore, understanding Turkey’s needs and mending ties should be one of Biden’s foreign policy priorities. The United States will have a lot to gain.