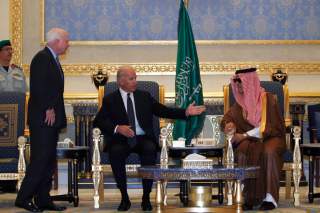 “I would, in fact, curtail aid, curtail foreign assistance to countries who, in fact, engage in this kind of behavior,” he said. “Just like I would if I were dealing with China and what they’re doing to the Uighurs, a million Uighurs … Muslims. So what’s the difference? It is pure, unadulterated prejudice.”

Biden acknowledged the United States’ relationship with the country, but called its track record of how it treats LGBTQ people intolerable.

Same-sex relationships are criminalized in Saudi Arabia and homosexuality is punishable in Saudi Arabia with death, according to Amnesty International. The country allegedly does not have written laws on sexual orientation or on gender identity but follows Sharia law, the Guardian reported.