Biden Can Show True Leadership By Helping to Stabilize Libya 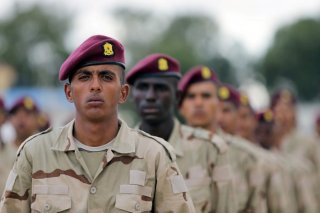 Since taking office, Joe Biden has repeatedly emphasized that “America is back” and ready to take the lead on confronting difficult issues. However, beyond ambitious and laudable plans to crack down on tax avoidance, organize against climate change and counter China's economic diplomacy in developing countries, the still-new administration lacks concrete examples of what they stand for and what they can achieve in the realm of foreign policy. A concerted diplomatic effort to assist the Libyan constitutional process as it goes through a current moment of uncertainty is precisely the opportunity the administration needs.

Biden’s team will need to overcome its thus far demonstrated reluctance to do so. In August 2020,  Jonathan Finer, now Biden’s deputy national security advisor, co-wrote a memo titled “Ending the Forever Wars.” This argued for a need to rethink the U.S. counterterrorism strategy in favor of a more cautious approach. This perspective parallels Biden’s own long-held views. Regretting his support for the Iraq War, he waged a one-man opposition against troop surges in Afghanistan during Barack Obama’s presidency. He is now following through on his promise to complete the troop withdrawal from Afghanistan by September, exemplified by the recent closing of Bagram Airfield. This is part of a conscious de-prioritization strategy: Biden and his team would rather not waste precious resources in a region that they view as having only drawn policymakers into long, arduous, and ultimately unproductive efforts.

These fears are heightened in the case of Libya. Memories of the 2011 NATO Intervention in Libya carried out under the Obama administration, the tragic 2012 Benghazi attacks which resulted in the assassination of the U.S. ambassador, and the ensuing collapse of governing institutions have dissuaded action. Obama described his lack of preparation for the “day after” in Libya as his greatest regret, and current members of the Biden administration were burnt by the fall-out. The result has been a lack of engagement on Libya, beyond general support for the United Nations and European Union’s efforts to seek a solution for the protracted crisis gripping the country. Washington would simply rather not get involved.

If Libya exemplifies the motivation of this withdrawal, it also demonstrates the dangerous consequences of a lack of U.S. diplomatic attention. The current state of Libya is daunting. Divided after a decade of near-continuous conflict, a vast array of militias is split between two governments each counting on their own international patrons. The western Government of National Accord, recognized by the UN and backed militarily by Turkey, finds itself against the rogue General Khalifa Haftar, the de-facto ruler of the east of the country supported by the United Arab Emirates, Egypt, and Russia. The existence of the split has persevered, despite the ostensible creation of a Government of National Unity under Prime Minster Abdul Hamid Dbeibeh earlier this year.

Biden's view that Libya is a complex case best left to the UN and the EU is understandable. However, such a perspective not only overlooks the contribution that a poorly planned U.S. intervention made to the current crisis, but also the potential for its worsening without U.S. support. There are worrying signs that the UN-backed constitutional process is running into difficulty, leaving the prospect of December elections in doubt and making the resurgence of conflict likely. An uneasy ceasefire is barely holding but troop movements have started again. This risk of collapse without some degree of U.S. support, alongside regional implications, has been overlooked.

A decisive U.S. diplomatic effort would provide three sets of benefits: humanitarian, political, and diplomatic. It would help avert a resurgence of conflict and thus avert death, suffering, and an exacerbation of poverty. These humanitarian benefits also realize U.S. political aims. A free, prosperous, and stable Libya is good for the Middle East and bad for terror networks. Libyan stability lowers the temperature of the migrant crisis for European allies, a point that French president Emmanuel Macron has already stressed personally to Biden. It would also counter Russian influence in the Middle East, which used a similar U.S. vacuum in Syria to lay a claim to regional importance. Libyan stability would help the process of US-Turkish rapprochement, in turn strengthening NATO. Finally, there are potential diplomatic benefits. The United States stepping up sends a clear message to allies and opponents alike; the United States is again thinking internationally, multilaterally, and diplomatically—The United States is back.

In contrast to such vast potential gains, the costs of U.S. engagement are low. The United States already has the means to be a decisive actor. Anwar Sadat’s observation that the United States “holds 99% of the cards in the region” still rings broadly true. Through its pre-existing relationships with the UAE, Egypt, Turkey, and the EU, combined with a lack of deep prior involvement in the Libyan civil war, the United States is best positioned to offer solutions. Especially relevant for an administration cautious about the use of the force, there is little chance of the United States stumbling into a military intervention in Libya. The ceasefire is tentatively holding, and diplomatic efforts do not commit the United States in any way to using force. There is no risk of another “forever war.”

The role that the United States could play is not only by pressuring actors towards a solution but by injecting neglected ideas into the constitutional process. Currently, the constitutional process is running up against a gamut of dilemmas. A constitution is needed that wins widespread support and buy-in from competing factions. This must, however, be done before December to allow planned elections to be held. It must stop either of the two rival governments from dominating postwar Libya while providing leadership they can both support. It must include Libya’s minority groups while offering a national vision. A failure on even one of these points raises the risk of renewed conflict. Even as the UN-backed process founders against these challenges, a revised adoption of the 1951 constitution could square the circle that Libya finds itself in.

Before being overturned by Muammar Gaddafi’s coup in 1969, the 1951 constitution provided a crucial role in maintaining peace and national unity. After significant changes to better incorporate the past seventy years of evolving constitutional design, there is reason to believe that it could provide the same role yet again. It contains provisions protecting human rights, promoting transparency, and committing the country to democracy. Its support for a constitutional monarchy has been seen as an archaic flaw, but provides unexpected benefits given the current situation. A monarchy, albeit with reduced powers, offers a national leader not associated with any of the current factions. It makes provision for a federalism that could avert partition while maintaining provincial autonomy.

It also crucially occupies a vital space in the Libyan political consciousness, as the monarchy represents the one moment of freedom in pre-Gaddafi Libyan history. This is evidenced by a supportive domestic movement. In 2014, a proposal was launched in the Libyan General National Congress in support of a referendum to reinstall the monarchy with a former foreign minister even speaking out in favor. The adoption of a revised 1951 constitution satisfies the demands of the moment. It can be agreed upon in time for the December elections or immediately thereafter, does not provoke outright rejection from any one side, and provides a means through which the country can continue to develop diplomatically with a national yet decentralized vision. This is the fresh perspective that the United States can offer.

Libya stands at a tipping point. The Biden administration can make its first true foreign policy stand by supporting Libya’s political, economic, and social recovery through an injection of diplomatic muscle and new ideas into the Libyan constitutional process. While doing so, the United States stands ready to achieve concrete geopolitical goals such as supporting European allies, renewing collaboration with Turkey, countering Russian influence, and reducing the instability that terror groups thrive on. Libya could serve as a potent example of moral and political goals working together in Biden's foreign policy, thus sending a clear signal of intent to the global community. This set of triple gains—moral, political, and diplomatic—would come at relatively little cost; the United States already has the relationships, there are few obvious military risks, and there is a pre-existing, adaptable constitutional solution. The missing ingredient is diplomatic will. If Biden wants to prove the return of a helpful, global, and moral U.S. foreign policy, he should look no further than the Libyan constitutional process.