Biden Energy Adviser: We Could Soon See $4 Per Gallon Gas 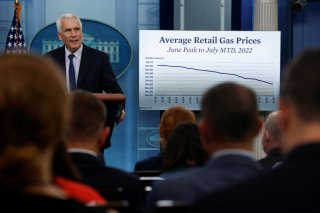 A top White House energy adviser stated this past weekend that the nation’s gas prices—currently sitting at an average of $4.49 per gallon—could soon dip below $4.

“We already have many gas stations around the country that are below $4,” Amos Hochstein, the special presidential coordinator for international energy affairs, told CBS News’ Face the Nation on Sunday.

“This is the fastest decline rate that we’ve seen against a major increase of oil prices during a war in Europe where one of the parties in the war is the third largest producer in the world,” he continued.

“We’ve seen the national average price of gasoline decline for a fifth straight week, with the pace of recent declines accelerating to some of the most significant we’ve seen in years. This trend is likely to reach a sixth straight week, with prices likely to fall again this week. Barring major hurricanes, outages or unexpected disruptions, I forecast the national average to fall to $3.99/gal by mid-August,” he wrote in a blog post.

“So far, we’ve seen the national average drop for 34 straight days, with over 25,000 stations now back at $3.99 per gallon or less, and thousands more stations will join this week. In addition, we will see several states fall back under an average of $4, the majority being in the south, but that could spread to more states in the weeks ahead,” De Haan added.

Hochstein also took time to point out the Biden administration’s decision to tap into the nation’s Strategic Petroleum Reserve earlier this year in an effort to help lower pump prices. “Over the last few months, the president has supplied the U.S. market with a million barrels a day, which is a historic level,” he said.

Hochstein, though, noted that U.S. oil producers need to further ramp up their production. “The private sector, as we talk to them in the United States, said they can increase production in the United States by about a million barrels a day, but it’s going to take time to invest in it. It will come at the end of the year,” he said.

According to AAA, further helping to push gas prices lower is the fact that there has been a noticeable drop in gas demand.

“Global economic headwinds are pushing oil prices lower and less expensive oil leads to lower pump prices,” Andrew Gross, AAA spokesperson, said in a release. “And here at home, people are fueling up less, despite this being the height of the traditional summer driving season. These two key factors are behind the recent drop in pump prices.”