Biden Falters, but With No Clear Winner in Iowa What Happens Next? 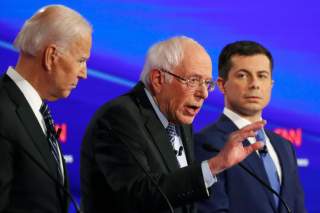 Following the inexplicable and inconclusive results of the Iowa caucus, significance now falls on the New Hampshire primary as the first reliable vote of the Democratic primary. According to the latest poll conducted by The Boston Globe and Suffolk University, Senator Bernie Sanders of Vermont is now the odds-on favorite to carry the state.

The self-described “democratic socialist” has remained steady with a quarter of the New Hampshire electorate—24% of the vote. His nearest competitors, former Vice President Joe Biden and South Bend, Indiana Mayor Pete Buttigieg, are tied for second place at 15%.

With less than two-thirds of the Iowa caucus vote released, and the accuracy of those results doubted by meaningful members of the public, it is unknown who the won the caucus. This prevented the expected political elimination of smaller candidates or a winner from receiving a fundraising and enthusiasm boost.

This situation did not prevent Buttigieg, during his speech that night, to declare “by all indications, we are going on to New Hampshire victorious.” At the time, zero percent of precincts had been counted.

While the winner of Iowa is in doubt, it is apparent that Biden came in fourth place, behind Sanders, Buttigieg, and Massachusetts Senator Elizabeth Warren. This is a difficult position for the seventy-seven-year-old, who for the past year has been considered the Democratic frontrunner due to his strong lead in polls. Luckily for Biden, the uncertainty at the top of the results lessened the media coverage of his under-performance.

“Sanders is a favorite to win New Hampshire no matter what,” writes Nate Silver, editor of FiveThirtyEight. Silver’s election model gives Sanders a three in five chance of winning the primary. Sanders won New Hampshire with 60% of the vote in the 2016 primary, competing against former Secretary of State Hillary Clinton.

Going down the line, The Boston Globe and Suffolk University peg Warren at 10%—the last candidate to be in the double digits. Others contenders include Senator Amy Klobuchar of Minnesota at 6%, Representative Tulsi Gabbard of Hawaii and California billionaire Tom Steyer tied at 5% each, and tech entrepreneur Andrew Yang of New York with 3%.

14% of those polled were currently undecided, with six days remaining before the vote.

The only significant event coming up is the next Democratic debate, scheduled for Friday evening. The qualifying participants include Sanders, Buttigieg, Biden, Warren, Klobuchar, Yang, and Steyer.