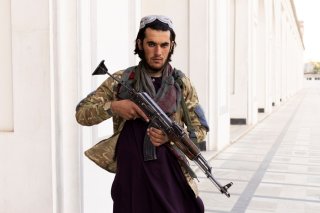 The White House and its Congressional supporters seek to forget the chaotic withdrawal from Afghanistan. Thirteen Americans (and 169 Afghans) died needlessly at Kabul airport because of poor Pentagon planning and National Security Council direction. Secretary of Defense Lloyd Austin was too deferential in his refusal to question bad policy, while Secretary of State Antony Blinken, National Security Advisor Jake Sullivan, his deputy Jon Finer, and Undersecretary of Defense for Policy Colin Kahl—the four officials reportedly most engaged in executing Biden’s withdrawal policy—had no military experience. For many Democrats, the result is a political problem, one that they fear Republicans will exploit should they regain Congress in 2022. Too many Republicans, for their part, view Afghanistan only through the prism of partisan score-settling.

Both Republicans and Democrats fail the United States, however, if they treat Afghanistan only as a political football and ignore the ramifications from the withdrawal which are now apparent.

First, the Taliban have failed to consolidate control over their own movement, let alone the country. In a recent Kandahar meeting, Afghans say the three main Pashtun factions and a Pakistani intelligence service representative failed not only to come to a consensus on the way forward for the Taliban’s Islamic Emirate, but also were unable to get Northern Shura members to attend.

Recent mosque bombings are ominous because they suggest terror is about to get much worse. In the past, the Afghanistan fighting season began in April when winter snows melted enough to allow movement. The White House and Pentagon appear to have misinterpreted the relative calm which followed the U.S. withdrawal as a sign that the Taliban could consolidate control and, if provided enough aid, govern. In reality, the calm was illusionary. While Uzbekistan denies that there was a cross-border rocket attack into Termez on April 11, 2022, locals confirm the strike and say a diplomatic convenience motivates the denials.

Also naive was the notion that the Taliban’s desire for legitimacy would give the international community leverage. Two weeks ago, the Russian government quietly handed the Afghanistan embassy in Moscow over to a Taliban diplomat. Videos circulating on Telegram and Signal showing the Taliban flag now draped inside the building, with diplomats loyal to the former government unceremoniously booted from the embassy by the Russian government. The Russian move shows the gullibility of those who believed international opprobrium would be enough to ensure the Taliban respected women’s rights.

An even greater error—the blame for which transcends administrations—was the belief that the United States could co-opt the Taliban as an ally in the fight against even worse terror groups.  Prior the withdrawal, it was already apparent that the Taliban’s commitment to dissociate itself from Al Qaeda was illusionary. Between the signing of the February 29, 2020, U.S.-Taliban peace deal and the ultimate U.S. withdrawal, U.S. or Afghan Special Forces twice killed Al Qaeda in the Indian Subcontinent leaders operating inside Taliban-controlled territory. Taliban terror support appears to have worsened as the group consolidates control. Twice weekly, Afghans in Kabul say, the Taliban-controlled passport office closes for ordinary business. On those days, Afghans say, foreign fighters flock to the office to receive credentials that they can use to infiltrate Europe, Canada, or the United States. Afghan refugees deserve more support—the West bears special responsibility for their plight—but information coming from Kabul now shows concern about the weaponization of refugees is not simply right-wing, anti-immigration paranoia.

Meanwhile, rather than eschew terror, the Taliban embrace their role as a symbol of Islamist victory over a decadent West. Videos showing recent riots at the Al Aqsa mosque show some protestors waving Taliban flags, not because they are members of the group but rather because the Taliban defeat of the United States is now an inspiration.

Any hope that Pakistan, whose support to both the Taliban and safe-haven for Al Qaeda was crucial to the maintenance of their two-decade insurgency, can control the militants or prevent terrorism is also misguided. Pakistan today is discovering that they have unleashed a monster that they can no longer control. Perhaps Pakistan maintains leverage over some Taliban leaders, but there are enough figures within the militant group who prioritize their ideology above Pakistan’s efforts at practicality

After the Soviet Union withdrew from Afghanistan in 1989, the United States ignored the problem of Afghanistan’s growing willingness to serve as a safe haven for terror. Perhaps ignorance was a factor: few within the counterterror community understood the reach and lethality of what too many dismissed as Al Qaeda’s ragtag band of militants. Ignorance is no longer an excuse. Not only is the United States aware of the Taliban’s insincerity and Al Qaeda’s (and the Islamic State’s) lethality, but it now knowingly provides the group money in the name of humanitarian relief. This is a mistake on par of turning a blind eye to flight students who seek to take off but have no interest in learning how to land.

There certainly should be a nonpartisan investigation into what went wrong with the mechanics of U.S. withdrawal not as a political witch hunt but instead only to ensure Washington does not repeat such mistakes in the future. At the same time, while many U.S. policymakers are happy to consign America’s longest war in the rearview mirror, reality must intrude. The threat from Afghanistan is growing. Leverage over the Taliban was always more theoretical than real.

At the same time, there are opportunities to head off a future 9/11. In both Kabul and Kyiv, the White House encouraged surrender rather than a fight, in Afghanistan’s case to make way for a coalition-backed provisional government and in Ukraine’s case to avoid the inevitability of Russian victory. As the Taliban advanced, President Ashraf Ghani fled in the middle of the night. President Volodymyr Zelenskyy stayed and fought, showing what is possible when the people believe in the cause.

Some Afghans may have been glad to see Ghani go, blaming him for corruption and hoping that Taliban rule would at least end the bloodshed. They now know that the grass was not greener on the other side.

While Biden and U.S. politicos like Blinken preferred to blame the Afghan National Security Forces (ANSF) for an alleged unwillingness to stand up for Afghanistan, this was always a cheap shot. As Blinken testified in Congress, criticism about weaponry left behind falling into Taliban hands was overblown since it could not be operated or maintained without American contractors which he had withdrawn. In effect, the White House pulled the carpet out from beneath the ANSF.

In recent weeks, however, there are signs that remnants of the ANSF have regrouped under Ahmad Massoud’s leadership of the National Resistance Front. Massoud fills the role of the Afghan Zelenskyy. The opposition has staged attacks in at least five provinces and even in Kandahar without any outside assistance. They have forced Taliban retreats. Should they receive covert support, their ability to roll back the Taliban would be real.

If the White House chooses to circle the wagons and stick to the notion that abandoning Afghanistan was wise despite all evidence to the contrary, they will go down in history as responsible not only for a mismanaged withdrawal but for willfully enabling a terror resurgence. If, on the other hand, they calibrate policy to reality and seize opportunities to mitigate the danger emanating from the Taliban’s Afghanistan, they may avert a disaster far more calamitous than merely political embarrassment.