Biden Must Censure Iran for Its Nuclear Misconduct 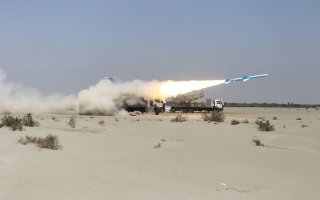 A meeting in Vienna in two weeks’ time will reveal whether the White House is serious about preventing the Islamic Republic of Iran from developing a nuclear weapon. At its quarterly gathering, the Board of Governors of the International Atomic Energy Agency (IAEA) will decide whether to censure Tehran for stonewalling the agency’s inspectors while accelerating its nuclear program. The board is looking for President Joe Biden to signal whether he is prepared to stand up to Tehran, or whether he will ignore Iranian violations in hopes of reviving the 2015 nuclear deal.

The IAEA has been sounding the alarm for years about Iran’s undeclared nuclear activities. The agency’s inspectors detected man-made uranium particles at three Iranian sites in 2019 and 2020. These discoveries constitute clear violations of both Iran’s binding safeguards agreement with the IAEA, and of its obligation under the Nuclear Non-Proliferation Treaty (NPT) to disclose and declare locations where it makes and uses nuclear material. At first, Tehran tried to remove and sanitize evidence of illicit activities, while denying inspectors access to two of the suspect sites for nearly a year.

In response, a Board of Governors resolution in June 2020 called on Iran “to fully cooperate with the Agency and satisfy the Agency’s requests without any further delay, including by providing prompt access to the locations.” Tehran provided access to the two blocked sites in the fall of 2020.

Nonetheless, the IAEA’s director-general reported in May 2021 that Iran still had not answered its questions about the man-made uranium particles inspectors found. In July, he stated that Tehran’s engagement on the matter had “basically stopped.”

A country with a peaceful nuclear program wouldn’t need to pursue this kind of cover-up. Supreme Leader Ali Khamenei also knows that the negotiators Biden has tapped to revive the nuclear deal are  Obama administration veterans who previously allowed Tehran to sweep similar questions under the rug to secure the original nuclear deal, from which the Trump administration withdrew in 2018.

Since Biden took office, Tehran has escalated its resistance to IAEA oversight. The Islamic Republic announced in February it would no longer enforce the Additional Protocol, which enables the agency to conduct short-notice inspections at sites such as factories that make and assemble centrifuge machines to enrich uranium.

Tehran next halted IAEA access to video surveillance footage and other electronic data collected on agency devices at Iranian nuclear sites. The regime claimed it would continue to record the data and provide it to the IAEA once freed from U.S. economic sanctions. Otherwise, it will delete the information.

Last March, at the first Board of Governors meeting after Biden’s inauguration, the United States and its European allies blinked at Iran’s threats to scuttle nuclear talks if it faced any censure.

Tehran exploited this sign of weakness. The director-general said that the agency is “flying blind” in Iran. Yet while concealing some activities, Tehran is openly moving toward the production of weapons-grade uranium.

For the first time in its history, Iran began producing 60 percent enriched uranium, a short step to the 90 percent needed for nuclear weapons. The regime also began producing uranium metal, a key ingredient in nuclear weapon cores. It also installed hundreds of advanced centrifuges that enrich uranium more quickly than the regime’s older models. These actions violate the 2015 nuclear deal, rendering many of its provisions moot. Taken together, Tehran’s “breakout time”—the amount of time required to produce uranium for a single atomic bomb—stands at just over two months.

The Biden administration still wants to rejoin the expiring nuclear deal and has consistently proffered unilateral concessions and sanctions relief in exchange for the Islamic Republic’s nuclear restraint. Instead, Tehran upped its regional attacks and rapidly augmented its atomic program.

The E3—France, the United Kingdom, and Germany—often seek to restrain the United States when it wants to challenge Tehran. But there are indications that the Islamic Republic may have gone too far. The E3 recently emphasized that the regime’s recent nuclear steps have no civilian justification.

Ahead of the board’s next meeting, Biden should put forward a strong IAEA resolution that censures Iran and demands immediate compliance with the IAEA’s investigation, a return to the Additional Protocol, and a restoration of the agency’s prior monitoring activities. If the United States and the E3 take the lead on this resolution, it will pass.

There will be a debate inside the Biden administration about whether this approach would push Iran to withdraw from nuclear talks, also in Vienna. Yet nuclear talks cannot achieve their purpose if Iran believes there is no cost to stonewalling the IAEA – the body charged with monitoring and verification of any potential deal.

Biden is likely preoccupied with the Afghanistan withdrawal, but this issue deserves his attention. Preventing the world’s foremost state sponsor of terrorism from acquiring a nuclear weapon depends on holding it accountable for the violations it has already committed.

Anthony Ruggiero is a senior fellow at the Foundation for Defense of Democracies (FDD), where Andrea Stricker is a research fellow. Follow the authors on Twitter @NatSecAnthony and @StrickerNonpro. FDD is a Washington, DC-based, nonpartisan research institute focusing on national security and foreign policy.