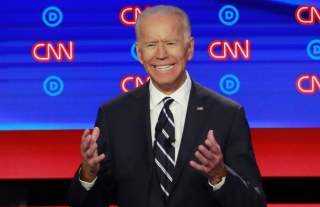 2020 Democratic presidential candidate Joe Biden reportedly offered his sympathies on the two mass shootings over the weekend, but mixed up the locations of both attacks.

Biden was talking to donors at a fundraising event in San Diego Sunday evening when he spoke about the two shootings that occurred over the weekend. The former Vice President reportedly referred to the shootings as “the tragic events in Houston today and also in Michigan the day before,” according to a pool report.

During his speech to donors, Biden mentioned that he didn’t hold President Donald Trump personally responsible for the shooting. He did talk about how Trump has influence in the U.S., according to the Washington Examiner.

“You know what, the president’s words have meaning, no matter who he or she is,” Biden said. “They are the face of America.”

Sunday adds to the list of moments when Biden has appeared confused and mixed up names. He referred to then-Prime Minister Theresa May as former British Prime Minister Margaret Thatcher in May. Thatcher was last in office in 1990.

Biden also mixed up his closing statements during the Democratic debate June 31, telling people to “go to Joe 30330” instead of texting the number. He also warned about having “eight more years of Trump” even though Trump can only be in office for four more years.