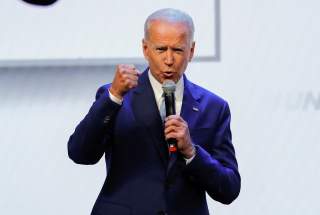 Biden, who is also a Democratic presidential candidate, is set to speak as Trump travels to Dayton, Ohio, and El Paso, Texas, in the wake of the cities’ shootings, according to excerpts of his speech released by his campaign, the Los Angeles Times reported.

“We have a president who has aligned himself with the darkest forces in this nation,” the excerpt reads. “And that makes winning the battle for the soul of this nation that much harder.”

He’s also set to say Trump does not offer moral leadership and does not show “evidence the presidency has awakened his conscience.”

“Instead we have a president with a toxic tongue who has publicly and unapologetically embraced a political strategy of hate, racism and division,” excerpts of Biden’s speech read.

“In both clear language and in code, this president has fanned the flames of white supremacy in this nation,” the excerpt reads.

Trump responded to reporter queries about Biden’s projected speech by saying he is “a pretty incompetent guy.”

“I’ve watched his interviews,” Trump told reporters at the White House on Wednesday, according to The Washington Post.

“I’ve watched what he said and how he said it, and I wouldn’t have rated him very high in the first place, but Biden has truly lost his fastball, that I can tell you.”

The Biden campaign did not immediately respond to a request for comment from the Daily Caller News Foundation.