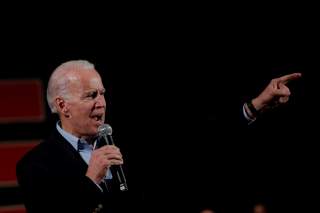 Democratic 2020 presidential candidate Joe Biden said Tuesday that his choice for vice president will have to be “immediately” capable of taking over as commander-in-chief because “I’m an old guy,” he told an audience in Iowa,

The remark highlights what is widely considered the former vice president’s biggest political liability. If elected in November,  he will be 78-years-old by Inauguration Day, making him the oldest president ever sworn into office by eight years.

Biden was initially asked if he would select California Sen. Kamala Harris as his second-in-command. Biden praised the former presidential candidate, saying that “she has the capacity to do just about anything.”

But he said that his first requirement for vice president is that the person is capable of taking over as president.

“For me, it has to be demonstrated that whomever I pick, there’s two things: One, he’s capable of immediately being a president because I’m an old guy,” Biden said.

He immediately qualified his candid remarks, saying that he is “in great health” because he works out every morning.

Biden talks about @KamalaHarris as VP. Says most important criteria is knowing whether the woman or man can do the job ‘ because I’m an old guy.’ pic.twitter.com/Zycm4Z4ywh

Biden has insisted throughout the campaign that his age should improve his electability.

“Look, one of the reasons I’m running is because of my age and my experience,” Biden said during a debate on Oct. 15.

“With it comes wisdom,” he continued. “We need someone to take office this time around who on day one can stand on the world stage, command the respect of world leaders from Putin to our allies, and know exactly what has to be done to get this country back on track.”

Biden has been dogged by concerns about his age throughout the campaign. His chief critics have pointed to his repeated gaffes on the campaign trail, and several speeches where he misidentified cities and states, or mixed up decades when certain events occurred.

Rep. Alexandra Ocasio-Cortez questioned whether Biden’s age had anything to do with his poor debate performances over the summer.

“His [Biden’s] performance on the stage kind of raised some questions with respect to [his age],” the New York Democrat said in an interview in July.

Earlier on Tuesday, Biden snapped at an Iowa voter who questioned his position on gas pipelines.

“Go vote for someone else,” Biden told the man.