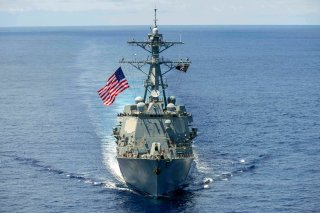 A recent piece in Foreign Policy advocated that the United States should not only continue its Freedom of Navigation Operations (FONOPs) in the South China Sea but enhance them and even declare them non-negotiable. Already two FONOPs have been undertaken under the Biden administration. But continuing them is a bad idea. U.S. FONOPs are arguably a violation of international law, a cover for freedom to spy, increase the risk of confrontation and conflict, are unwelcome by Southeast Asian states, are generally ineffective, and legally unnecessary.

FONOPs targeting China’s claims to certain features and its territorial sea regime can be interpreted as a threat to use force against its claimed territorial integrity. As such they may violate the prohibitions against the use of force in the UN Charter and the UN Convention on the Law of the Sea (UNCLOS).

Moreover, the United States and China have differences of interpretation regarding relevant clauses of the UNCLOS—that the United States has not ratified. China and many other countries argue that the Convention is a series of package deals and that non-ratifiers are not entitled to the
benefits” of the bargains while picking and choosing which of the provisions—or their interpretations thereof—they wish to abide by. They contend that interpretation of key terms in the Convention relevant to freedom of navigation—like “abuse of rights,” “due regard,” and “peaceful use/purpose”—are evolving rapidly through state practice and that non-ratifiers like the United States do not have the legitimacy to unilaterally interpret them to their advantage. Indeed, China claims that U.S. FONOPs as well as its intelligence probes are violating some of these principles.

Despite U.S. denials, U.S. FONOPs against China have always had a political purpose—to intimidate China into changing its policy. Indeed, some say that the FONOPs are also designed to “reassure America’s allies and partners in the region of America’s commitment.”

Then-U.S. Chief of Naval Operations Admiral John Richardson claimed that U.S. FONOPs “are by design non-provocative, non-escalatory.” That may be the U.S. intent, but Richardson well knows that China views the FONOPs as a threat of use of force and that they increase the possibility of confrontation and conflict.

Because of this risk, they are not welcome by Southeast Asian countries. Malaysia’s Foreign Minister Hishammuddin Hussein has said, “While international law guarantees the freedom of navigation, the presence of warships and vessels in the South China Sea has the potential to increase tensions that in turn may result in miscalculations which may affect peace, security and stability in the region.” While some may agree with the U.S. legal interpretation of freedom of navigation for warships, they do not support their use to enforce its interpretation. Indeed, after the October 2018 Decatur incident, Singapore’s Defense Minister Ng Eng Hen said that “Some of the incidents are from assertion of principles, but we recognize that the price of any physical incident is one that is too high and unnecessary to either assert or prove your position.” Philippines President Rodrigo Duterte said that “the threat of confrontation and trouble in the waterway came from outside the region.” Malaysian Prime Minister Mahathir Mohamad argues that “big warships [in the South China Sea] may cause incidents and that will lead to tension.” Also, given that the claims of all littoral Association of Southeast Asian Nations (ASEAN) members except Singapore and Brunei have been targets of U.S. Navy FONOPs, it is safe to say that they do not approve of this gunboat diplomacy—at least against themselves.

Moreover, U.S. FONOPs against China are ineffective in that they have not changed China’s policies or stopped its actions that the United States declares unlawful. They are also wasteful. They result in “lost time in restoring [the U.S.] war fighting edge.” The Navy could better use these assets “to train up for high-end conflict.”  Despite U.S. rhetoric to the contrary, U.S. FONOPs are not necessary to demonstrate the U.S. legal position. Although no country should acquiesce to claims that it considers illegal, such non-acquiescence can be effectively and sufficiently demonstrated by verbal and written diplomatic communiqués. This diplomatic option seems to be sufficient for other nations including maritime powers whose rights the U.S. claims to be protecting.

Indeed, diplomatic protest rather than “gunboat diplomacy” is more consonant with the UN Charter. It requires that “[a]ll Members shall settle their international disputes by peaceful means in such a manner that international peace and security, and justice, are not endangered.” According to William Aceves of California Western School of Law “the notion that states must take action which may lead to a violent confrontation or lose their rights under international law is inconsistent with the most basic principles of international law.” Moreover, given the political costs, if the United States still felt the need to kinetically challenge China’s claims, why does the US Navy deem it necessary to repeat specific challenges (FONOPs) to specific claims as it often does?

Given these problems with FONOPs, their diminution could be a bargaining chip to obtain other desired goals like a change in China’s behavior in the South China Sea. China and the United States could make a partial—and probably temporary—grand bargain. In such a bargain, China would refrain from further occupation, construction, and “militarization” on its claimed features. It would also not undertake any extremely provocative action like occupying and building on Scarborough Shoal, harassing other claimants in the disputed area, and declaring an air defense identification zone over the Spratlys. The United States, in turn, would decrease or cease altogether its provocative FONOPs there and its “close-in” intelligence probes. It would also refrain from belligerent threats and actions. But if FONOPs are “non-negotiable” as the author suggests, then such a bargain is not possible.

In sum, maintaining—let alone enhancing—FONOPs against China in the South China Sea is a bad idea. Hopefully, the U.S. Defense Department’s China task force will evaluate them and come to the same conclusion.