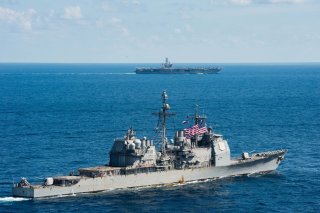 President Joe Biden signed the 2022 National Defense Authorization Act (NDAA) into law on December 27, 2021. Prior to his signature, the Department of Defense (DOD) had anticipated operating under Continuing Resolution (CR) H.R. 6119, which expires on February 18, 2022.

While, thankfully, Biden signed the bill before the New Year, the annual authorization dance causes uncertainty for national-security stakeholders. Even though the three policy choices—sign the NDAA, pass another CR, or accept a DOD shutdown—are known, the effects of a delayed signing are often brushed aside. But to downplay a delay in signing the NDAA is to eschew responsibility.

So, while Biden deserves credit for signing the bill, it is equally important to understand what the effects of a delayed signing are on the U.S. military.

Legally, in a shutdown, federal agencies “discontinue all non-discretionary functions..” For the DOD, a government shutdown halts active-duty pay for personnel and furloughs some civilians and contractors. In the DOD’s Acquisition Workforce—that is 90 percent civilian—a furlough effectively stops work. Civilians cannot provide “continuity, corporate knowledge, and functional depth” nor can contractors “fill gaps in technical specialties.” Further, a furlough often delays projects in a day-for-day slip, and since people need time to catch up on what has happened in their absence, the result is schedules extend. When these effects are aggregated, the discontinuation of non-discretionary functions is disastrous.

Given this dire alternative, policymakers and Hill staffers seek to err on caution’s side. They know CRs have great benefits—no pay interruptions for government workers or services, or brewing feelings of diminished institutional trust—and don’t look as bad as a shutdown. But the legislatorial practice is not without sins. Unranked priorities, delays, credibility questions, and funding dances annually plague DOD readiness under CRs.

First, and specifically, stop-gap bills fail to provide needed scope to the DOD, and this crucial omission undermines organizational decisionmaking. It is challenging—if not impossible—to meet the commander-in-chief’s intent if priorities do not exist. While this issue strictly applies to a smaller subset of projects, “There is general agreement among those who have studied them that CRs cause inefficiency in government operations and have other harmful effects.”

Second, CRs disallow “New Starts” which means DOD projects cannot start. Sorely-needed modernization efforts still stuck in either the “Research and Development” phase, or in the “Low Rate Initial Production” phase, are often inadvertent casualties. Such is the case with the Air Force’s Advanced Trainer Replacement T-X that upgrades training conditions for pilot-students. Unfortunately this project must cease work, as Mackenzie Eaglen, a defense expert at the American Enterprise Institute, wrote in Breaking Defense.

Third, and fourth, the DOD’s credibility as a good-faith partner to private businesses is in question when it fails to consistently pay, and pay on-time. By design, tech startups are heavily concentrated bets by venture capitalists and entrepreneurs on where technology is headed. Since these corporate entities raise capital in seed rounds, or batches, they often only carry eighteen to twenty-four months of operating cash on their books. As Katherine Boyle of Andreessen Horowitz, a venture capital firm, said in a Breaking Defense report, “many startups will go out of business waiting for [the] DOD to award real production contracts.” Further, a 2018 Congressional Research Service report “identified approximately 75 weapon programs that would be delayed by the CR’s prohibition on new starts and nearly 40 programs that would be affected by a restriction on production quantity”—that, when combined, tells a particularly damning story.

Although these types of procurement issues rarely grab headlines in the same way that reports on Russia or China have in recent years, the lack of attention does not diminish its importance. Future wars are won before the first bullet is fired, and how the United States procures matters greatly to the safety of the nation. For example, in World War II, the U.S. Navy purchased the Mark 14 torpedo which was a standard submarine-launched, anti-ship weapon. But because each unit was terribly expensive, limited operational tests were conducted. This failure not to test led to design defects—premature detonation, poor heading, downward drift—that impacted combat capability, and, as a result, the United States lost 3,500 sailors and fifty-four submarines to Imperial Japan. Over twenty-one months, the 22 percent loss rate was the greatest experienced by any naval force, of the U.S. Navy’s size, in World War II.

To stem the litany of issues, I suggest two ideas for consideration.

First, the DOD should use “colorless money” ubiquitously. Over the last few months, the Air Force leveraged colorless money to run three programs: the Strategic Mission Planning and Execution System, the Defense Enterprise Accounting and Management System, and Space Force’s Kobayashi Maru. For the 2022 NDAA, the House of Representatives proposed twelve additional projects allowed to use colorless funds, which is up from nine this previous fiscal year.

The concept is a “game changer” said Gen. Arnold Bunch, the four-star commander of Air Force Materiel Command. By giving action officers flexibility to shift funds across the functions of sustainment, production, and development, they become empowered. Ideally, no longer will program managers find themselves in the ironic position of having one bucket of funds, but not another that is needed to fund the weapon system. If this idea were applied broadly throughout the DOD, stakeholders would not be forced to unnecessarily compartmentalize cash or creative solutions to the typical problems that arise.

Second, the DOD will never hire exceptional talent by paying below-market wages. While this applies especially to software engineers, it also holds broadly. Junior officers will leave for far more enriching opportunities and closing the private-public pay gap would cauterize this hemorrhage. In the U.S.-China artificial intelligence Cold War—a contest in which rivals vie for relative gains and eschew escalatory physical violence—the winning side will be the one that can recruit and retain the best technical talent. High pay and, to a lesser degree, prestige are inextricably linked to job satisfaction, so cultivating one to create the other could start a shift in how the DOD is perceived by Silicon Valley. How can the U.S. Government create advanced technologies, such as Unmanned Underwater Vehicles, hypersonic glide vehicles, or satellite-killers at a relevant rate of innovation when the DOD is devoid of talent and reliant on the contractor’s expertise? It can’t.

Furthermore, it is an open secret that excess bloat at the Pentagon exists. But with a few cuts, a revenue-neutral restructuring could allow for a dedicated Government Scale for software developers, engineers, and cybersecurity experts to attract scarce talent. In the privatized-defense world, contractors are paid well at, sometimes, double or triple the assumed costs as factors, such as a company’s overheard are taken into account. Instead, if the government paid these folks directly, both parties could benefit greatly.

Ultimately, under a CR, national-security procurement challenges arise. From issues regarding unranked priorities to delays, and credibility questions to funding dances, the ability to complain about DOD acquisitions is almost a cliché. But the consequences of poor planning, testing, budgeting, and scheduling will immediately reveal themselves as evidenced by the Mark 14 torpedoes.

However, with a few solutions—such as implementing colorless money and paying market-wages to tech talent—the DOD can improve how it navigates in uncertainty, and serve as a more reliable partner to industry. Operational readiness is achievable, and the DOD can outflank China and Russia with robust system-level solutions.

Ryan J. A. Harden is an Air Force Officer and writer stationed near Boston, MA. Follow him on Twitter @Ryan_Harden.

The views expressed solely reflect the author’s opinion and do not claim to nor represent the Department of the Air Force, Department of Defense, or any other entity.