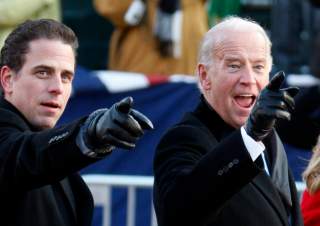 Former Vice President Joe Biden does not regret allowing his son Hunter Biden to work on the board of a Ukrainian gas company, a campaign official said Monday.

But Biden does not regret allowing his son to do business in Ukraine because Hunter Biden didn’t do anything wrong, a campaign manager said.

“Does former VP Biden now have any regret that he didn’t tell Hunter Biden, ‘You know what, I just don’t need the headache, don’t work there’?” asked CNN’s Alisyn Camerota.

“No,” responded deputy campaign manager Kate Bedingfield. “Because he didn’t do anything wrong.”

She added that asking the question is exactly what Trump would want.

“The White House said in 2014 that there was no issue with Hunter having that job,” Bedingfield said. “This is the playbook he ran in 2016 — we’re not going to let him do it this time. We are taking on directly any suggestion that there was anything improper here. There was not.”

She said Trump‘s behavior “should be the focus of our discussion,” saying the president attempted to “manufacture dirt” on Biden.

That’s what Americans should be “outraged by,” the deputy campaign manager said.

The Biden campaign did not immediately respond to the Daily Caller News Foundation’s request for comment.